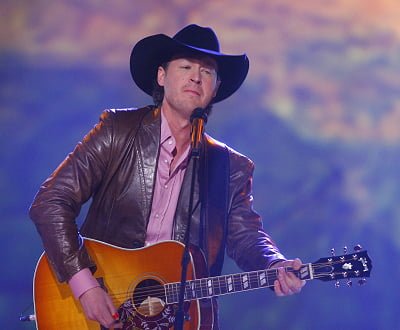 8:28 PM – Finger Eleven take the stage with a mini-orchestra opening for them, and do a bang-up job of “Paralyzer”. They’re not very interesting on stage, but it’s still the best performance so far tonight.

This performance also reminds me that CTV could really use some talented camera work on this show. You can have the best stage setup ever, but the camera work tonight is pretty damn dull.

8:32 PM – Belly and Deborah Cox are up to give out Pop Album of the Year, reading the telecaster again like they’re soulless, empty shells. Should I be drinking to really enjoy this show? Feist wins, of course, for The Reminder and gets another huge ovation from the crowd. Will she be allowed to say more than 10 words this time? Well, she at least gets to continue what she was saying and thanks her family, the “Feists.”

8:40 PM – Russell Peters is on-stage scratching up a few records, and he’s really good. Not sure why we’re watching a comedian doing the DJ routine, but he gets a few points for not being awful.

8:45 PM – We get a performance by the remarkably talented New Brunswick singer, Measha Brueggergosman, who also pays tribute to Oscar Peterson. It’s not my kinda music, but it’s always good that the show brings some talent like Measha in front of a big audience.

8:52 PM – Peters picks on a kid from the crowd (who just looks ashamed to even be there), gives some praise to Moses Znaimer, who was honoured during last night’s Juno industry event, and introduces Feist who takes the stage to perform… “Sea Lion”. Not my idea of Feist’s best music from the album, but at least it’s something different and she looks awesome on-stage with her guitar. That’s right people, Feist can rock it out.

8:58 PM – It’s around that time where I’m wondering if Global is rocking out a new episode of Simpsons or Family Guy, and Ill Scarlet take the stage to give out the Juno Fan Choice award… presented by a chip company I refuse to mention. Michael Buble wins the award, much to my own surprise since I expected the teeny-bopper vote my send it over to Avril. Being the extremely cool guy that he is, he gets on stage and thanks the fans, and says how much he likes his chips, even if they turn his teeth orange, and adds: “This is to all of the people who said that I couldn’t vote for myself enough times to win.”

I agree with alot of what you said about last nights Junos, although I am an Avril fan, I felt her “girlfriend” was a bit boring and that song is now as old as the hills. Finger Eleven did a fine job but I think the Best Live performance goes to Hedley who put on a darn good show. You are right, Feist can rock it! The Junos set a mellow tone that just is not fitting of an awards show and I, overall was a little disappointed. Maybe the people who come up with the ideas for the Junos, need to watch some clips from past grammy’s so they can see how an award show is really done.