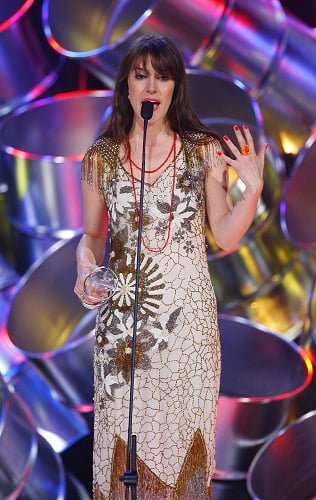 And the torture wraps up with the last hour of the night.

9:05 PM – Anne Murray and some friends perform on stage, with a standing ovation from the crowd. I have to admit, even I have a soft-spot for Anne and her groovy tunes. I’m also always amazed by how many people still love that woman. Seriously. If you missed her on the Rick Mercer Report, go check it out.

9:12 PM – Tom Cochrane introduces us to the tribute to “Arena Rock” and that of course means it’s time to give a little love to Triumph. I kid you not, that’s the band they decided to honour this year. They must really be running out of cool bands because I just don’t get this one. On the bright side, they don’t ask them to perform, and I find it pretty funny that the biggest cheer seems to be for Mike Levine‘s Calgary Flames jersey.

9:25 PM – New Group of the Year (formerly known as the kiss of death award) gets handed out and the fantastic Winter Sleep pick up the award. Still dying to see this band live, and it really sucks to hear the orchestra trying to play them off the stage, even if they didn’t have anything interesting to say.

9:28 PM – Hedley perform “For The Nights I Can’t Remember” with Jacob Hoggard doing his whole rubber-face singing routine while he plays piano. Catchy damn song though – even after being out for months.

9:36 PM – They launch into their first skit of the night with the very funny Jann Arden, who drops the Bullard bomb. Funny is noticeably absent from the sketch, much like the rest of the night. Michael Buble happily saves the moment though with his stellar “Everything”. He is such a natural up there, even with a fairly slow song, he makes this whole performance thing look easy. Definitely the best performance of the night, too.

9:45 PM – Group of the Year goes out to the extremely cool Blue Rodeo. Which makes me scratch my head a bit and wonder why the rocking performers (Hedley, Avril, etc.) all lack the presence of pros like Buble and Jim Cuddy. They do fall into the trap of thanking too many people without saying anything interesting, but Greg Keelor adds a nice thanks to Canada and the fans.

9:50 PM – Blue Rodeo quickly pay tribute to Jeff Healey before handing out the award for Album of the Year, which seems like a cincher for Feist, and of course, she gets it. After the year she’s had, this should not be a surprise to anyone of course, and she asks for the “nylon stringed guitar” not to cut her off.

9:54 PM – Peters continues his kinda-weird comes-ons and introduces Jully Black who performs “Seven Day Fool”. Not a bad performance, but nothing mind-blowing either. Like a lot of the others, she just seems rooted to the spot, but the song sounds great.

9:58 PM – …and the show finishes on time, but without any real sense of accomplishment if you ask me. I’d rather watch the Oscars go two hours over time with the odd bits of random fun than see the Junos finish dead on-time with barely any memorable moments.

What a bland show. No surprise winners, nothing notable except Peters’ random creepiness and Feist getting cut off. And isn’t this show supposed to be geared toward a younger, hip audience? I just can’t imagine it. Time for CTV and CARAS/The Junos to get a new production company and come up with some way to actually do the awards with some style.

How boring these Junos!! Gee, and to make things easier, just give all the awards to the same person, and that’s it! Let’s call it a night…. What about maybe one award for Michael Buble, one for Celine (who sure deserves some respect after 5 years of sold-out performances in Las Vegas, two albums that debuted at number 1 on Canadian charts in the same year – one in English and one in French no less) and one for Avril? Gee, what a stupid show!! No more Junos for me EVER… WTF? And Feist, she sure doesn’t deserve all of these awards. She should instead get an Apple Awards for that commercial success…

Do you think Feist would have won all these awards if she wasn’t from Calgary (since the show took place in Calgary??). And do you think Celine would have got some recognition if she wasn’t on tour in Australia and decided to be at the Awards??? Just to show you how twisted this industry is… And the Most Boring Moment Award of the Night goes to…. Oh, it’s a tie— Feist (for those depressing songs) and the Juno Organisation (for a lack variety).

Did Michael Buble Win Anything ?

Michael Buble won the Dorito’s Fans Choice Award. No, he didn’t win anything else, but at least he won a Grammy at the American Music Awards. I think it is a bit strange that Feist won everything she was nominated for.

Boy, Peter – got a chip on your shoulder? I think Feist had the best album of 2007, hands down. She also richly deserved the commercial success, and the album is not even remotely some sort of commercial sellout.

Beyond that, the awards are voted on months before the show, by people from across Canada. Why would they care if she’s from Calgary?

I agree that the show sucked, and CARAS has some issues, but I think most of the awards were well deserved by the winners.