Adventures in the dark city 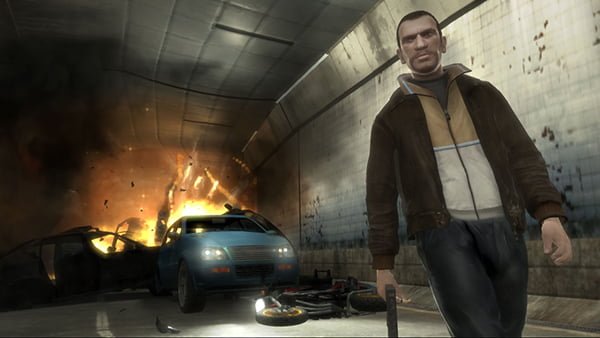 For the last two weeks I’ve been playing Grand Theft Auto IV, the first game I’ve picked up in the whole series, and I can honestly say I haven’t been this addicted or challenged by a game in ages.

Sure, other titles like Halo 3 or Rainbow Six Vegas 2 left me replaying certain scenes a few times before I could get through, but in GTA IV there are so many ways to change how you finish a particular challenge. In one mission I had to get into a building, kill off the bad guys, and escape with some, ahem, merchandise. That’s of course when the cops showed up to take Niko out. That left me with the main challenge of escaping the wanted level I had picked up as the police gave chase. There was no set direction I had to go in, it was up to me how I got out of that place, and how I would lose the police following me.

The complexity of the missions, and the depth of the story is really cool, but I think I was even more impressed with the day-to-day stuff packed into the game. Driving around the city, going out to play pool with a gangster friend, finding hidden weapons and other secrets, listening to the unbelievably hilarious radio ads, and even just seeing what kind of vehicles there are to drive.

It will take me a long time to explore all of the map, get through all of the side missions, and see how much trouble I can get into, and I expect by that time there will be some kind of extra content to download from Xbox Live. I haven’t even had a chance to play the online portion of the game yet.

As soon as I can get a bit further into the game I’ll have a full review, but this is really for those of you out there who are just thinking about playing the game, and haven’t already become addicted. It is certainly not a title for everyone, considering how dark and dirty the game can get, but it is one of the most creative examples of sandbox gaming that I can think of, especially if you’re looking for something that literally gives you a city to play with.