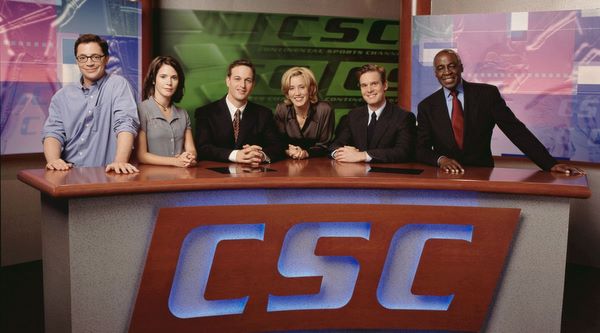 The cast of Sports Night

Every week I write my DVD column, and every week I feel like I have to short change some great movie or TV show.

On any given week there are at least five new, notable shows or movies arriving on DVD, and at most I try to write between 800 to 1000 words for my column. That means that if I really have anything meaningful to say about a DVD, I have about 300 words to say about the big releases, and I can really only pick two at most per week.

This year, one of the main DVDs that I felt I really missed out on talking about more was the vastly under-appreciated Sports Night.

Created by Aaron Sorkin, the man who was also responsible for giving us The West Wing, the series debuted in 1998 and starred Josh Charles and Peter Krause as anchors on a popular national sports show.

With a strong supporting cast, which included Felicity Huffman, Joshua Malina, Sabrina Lloyd (my favorite), and the incredible Robert Guillaume, the dramatic comedy was mostly about what happened between the characters, rather than on the show itself. Sports Night also featured Sorkin’s unmistakably witty dialogue and strong characters.

Just as an example of the last part, look at Joshua Malina’s character, Jeremy, an associate producer and analyst who doesn’t fall into the usual “geek character” stereotypes. He knows everything, but he also follows sports, and is an outgoing, vocal guy.

The show’s real fire and passion was always between Peter Krause as Casey, and Felicity Huffman as the show’s executive producer, Dana. That sub-plot, co-star Robert Guillaume as Isaac, and the amazing group energy of the cast kept this show buzzing for two seasons.

The show was not for everyone. It was intelligent and perhaps less funny than the U.S. broadcaster wanted, but it was pure genius all the same, even with the tacked on laugh track the studio forced on it.

Just do yourself a favour and pick up this intelligent dramedy on DVD. The tenth anniversary collection includes evety episode, plus a number of awesome commentary tracks and a few excellent features on the short-lived series.