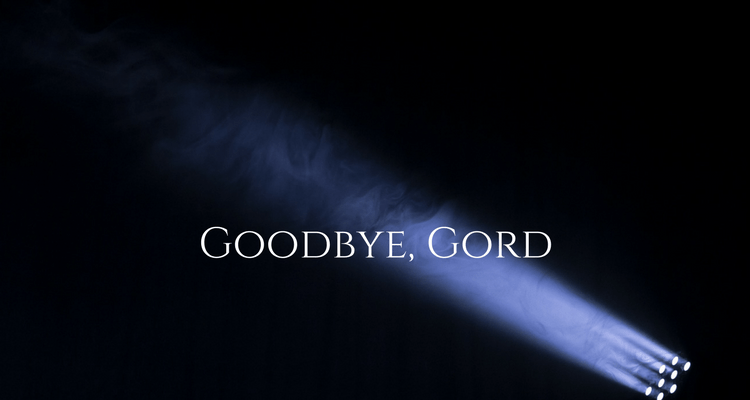 I was 17 when I first saw Gord Downie perform, and it was a performance that I will never forget. Downie was mesmerizing, powerful, and otherworldly, and that night he seemed ready to fly out of his own skin as he sang.

That was back in 1992 when the Tragically Hip brought their tour to the Moncton Coliseum, just a month after Fully Completely was released. It would be years before I would completely appreciate how much the group meant to me, but it was a concert that left marks on my mind, heart, and soul.

My friend Darryl and I had connected with Fully Completely immediately. The music got in under my skin, and into my head, and wrapped itself around my heart, and Downie’s lyrics just tugged and tugged at me. I was a big fan of poetry, and Downie’s lyricism was bold, and sincere; sad, and filled with erratic genius. The Hip made music for the soul and the spirit, and the beating heart was Gord Downie.

The memory of Downie on stage then, all those years ago, feels fresh and raw now. Downie’s influence on me, and my taste in music, lives with me to this day.

When I first heard that Downie was sick, I started preparing for the day he would no longer be with us, but it has done nothing to lessen the blow of losing him. I’ve spent the day reading what people have said, how they’ve honoured him, and how they’ve grieved at their loss. From our Prime Minister, to music icons, and friends, and strangers.

I’ve listened to numerous songs (“Ahead By A Century” and “Long Time Running” have always been favorites) and albums throughout the day, caught a moment of Downie in the film One Week by accident, and I still feel lost for words. I’m jumbled up–a lot like his lyrics, maybe. But I’m no poet.

Canada has lost a great musician, and we’ve also lost an icon, a great representative for our country, and a great supporter for Indigenous reconciliation.

No one has captured the feeling of loss better, I would say, than Macleans and their heart-warming, heart-rending obituary by Michael Barclay. The story captures so much, with such clear, eloquent purpose. It’s a beautiful tribute to the man, and his legend.

You can leave your thoughts about Gord Downie, and make a donation toward’s Sunnybrooke’s Brain Cancer Research, where Downie was treated, on the Sunnybrook Foundation site.

CTV has also announced that they will debut Long Time Running, the documentary about The Tragically Hip during their 2016 tour across Canada, this Friday, October 20 at 8:00 PM (ET/PT). The documentary will air again on Sunday, November 12 at 8:00 PM (ET) and 9:00 PM (MT) on CTV.