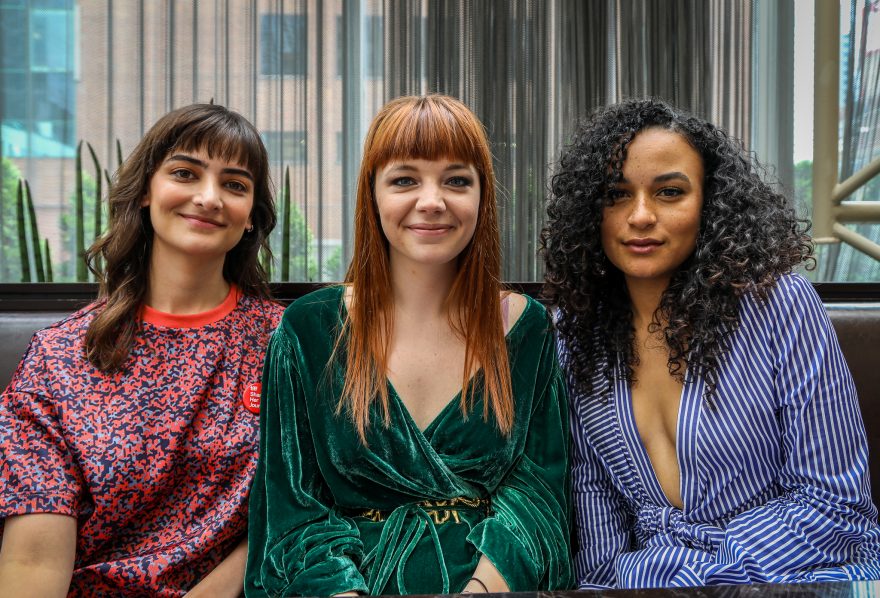 TIFF is always a surprise. You really never know how the festival will go until you’re in it. Interview slots get moved, the lineup of talent can often change, and so much more, but #TIFF18 has been incredible for me, and I’ve wholeheartedly loved the films that I’ve picked this year.

A few of my favorite films so far this year are Firecrackers, Nekrotronic, Husband Material, Freaks, Giant Little Ones, and Clara, and I’ve got a lot more to see before Sunday and the end of the festival too.

This year I honestly scheduled my TIFF to be a bit different, scheduling only on-camera interviews, and going after films I was passionate about, rather than packing my schedule day-to-day. So far that has made me not only feel like I can handle the schedule better, but I’ve had more time to share highlights on social.

There are a lot of films that I can’t talk a lot about yet, because they haven’t screened for the public, but I can say that all of my interviews have been tremendously awesome. Everyone has been energized, excited, and thoughtful, and I think that also speaks to the types of projects I wanted to follow this year too.

I’m going to share a few blog posts this week, rounding up my thoughts about highlights from TIFF, and to start with, here’s my rundown from the first few days of the fest.

My festival experience started last Tuesday with a preview of The Stylist Suite in Yorkville, where I checked out some of the designers that are dressing the stars, followed on Wednesday by previews of the Bask-It-Style and Suite on the Sixth lounges that featured Turo, Pilot Coffee, Lindt, Casper, DK Books, and so many more. The suites pack a lot of local talent together, from established to up-and-coming brands, and it’s also a peek behind the curtain a bit.

Before the festival started, Ticketmaster also sent me a fun TIFF-themed care package with popcorn, a marquee sign, and an offer to get me two tickets to a movie at the festival. So I’m seeing First Man this Saturday, a film I’ve been dying to see, and while there aren’t any tickets left for that film at TIFF, there are still a number of tickets for screenings over the next few days. You can find a list of all the available screenings still at tiff.net/tiff/onsale.html.

When the festival started on Thursday, I screened Assassination Nation (prepping for my junket interviews today!) and then ran off to try some epic Grey Goose cocktails with Global Ambassador Joe McCanta. As always, Joe was an excellent host, and the cocktails, especially Le Premiere, a clever popcorn-flavoured cocktail, were delicious.

I also had interviews that day for Nekrotronic, including with the great Monica Bellucci, who plays the film’s villain, as well as kick-ass co-stars Caroline Ford and Tess Haubrich, and the director and writer, Kiah Roache-Turner and Tristan Roache-Turner. The film is the perfect Midnight Madness feature, I have to say, and I give them big credit for all of the practical special effects.

Then, there was Firecrackers, a remarkable film made by a remarkable filmmaker with a remarkable cast. Jasmin Mozaffari is an up-and-coming filmmaker who represents why #ShareHerJourney is so important, and her work with actors Michaela Kurimsky and Karena Evans yields one of my favorite films at TIFF this year. The story is mesmerizing, but it’s also the way she frames the subjects, the depth to the characters, and the attention to detail and place that makes it such a powerful film.

The storytelling surrounding the younger brother in the film, Jesse, played by Callum Thompson, is also heartbreakingly vivid.

On top of all of this, I had a fantastic conversation with Mozaffari and her stars on Saturday, which you’ll have to wait for, but it was one of my best interviews this year.

Giant Little Ones came to my schedule late, after I had been looking to interview Taylor Hickson, and the film ended up being one of my favorites this year. My interview with Hickson is one of the most honest interviews I’ve had at TIFF in years too, and I now wish that I had requested to interview the film’s star, Josh Wiggins, because he is so incredible as Franky.

Best of all though, I love his relationships in the film. They’re messy, and real, but there’s way more to it than that. The film is strikingly original, not just in the depth that it goes into the characters, but with the way it handles sexuality.

I’ll have more on my TIFF activities soon, including my chat with two of the stars of Freaks, plus the stars of Clara, and the incredibly talented director The Third Wife, Ash Mayfair. I also dropped into the Fairmont Royal York for their Fairmont Loves Film pop-up, and I was at the CBC Films event at Bisha’s K?ST.