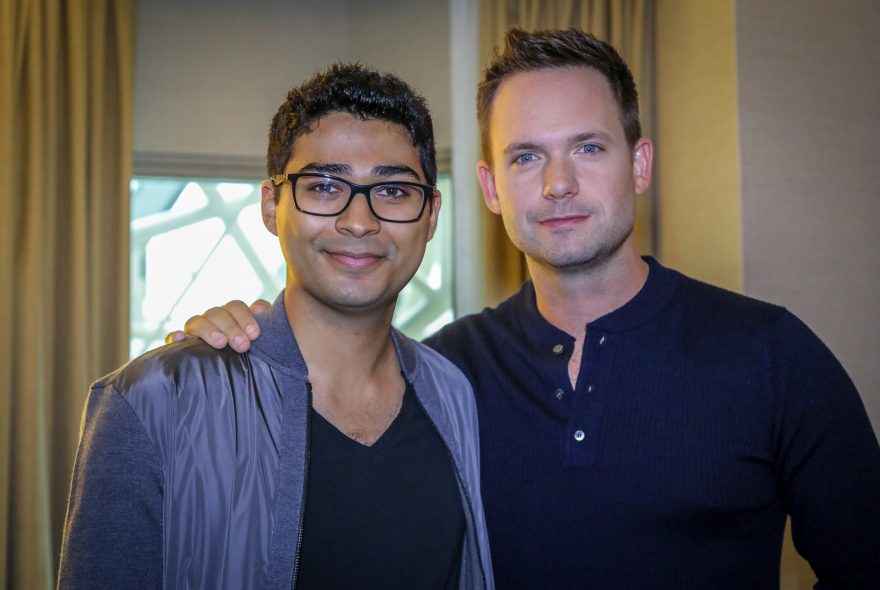 50 kilometres. That’s how far I’ve walked since last Wednesday when I started covering TIFF. Aside from Sunday, I’ve walked about 9,000 steps a day, and I love it. It’s my TIFF exercise, with a diet routine thrown for lack of options.

Between those steps, I’ve been just perfectly busy enough that I’m seeing 16 feature-length films, and I interviewed for 11 films, including one that didn’t even play at the festival, but I’ll get to that in a bit.

Aside from Firecrackers, and Giant Little Ones, some of my other favorites have been Husband Material, Assassination Nation, Clara, and The Third Wife, all of which I interviewed for. You’ll have to wait until next week to read my full review and watch my interviews for Assassination Nation, since the film comes out next week, but the other movies are a little way off, and they’re worth talking about now.

Clara is an incredible Canadian film by director Akash Sherman that stars Patrick J. Adams and his real-life wife, Troian Bellisario. Adams plays an astronomer named Isaac who is essentially falling out of touch with the world, until Clara (Bellisario) comes into his life as he hunts for a planet that could have life on it elsewhere in the galaxy.

The characters are rich and vivid, and Adams and Bellisario craft a complex relationship between these two polar opposites. The visuals, which transport you right up into space, also help make the film feel like a real odyssey into the unknown.

Interviewing Sherman, Adams, and co-stars Kristen Hager and Ennis Esmer–who play Isaac’s ex-wife and ex-research partner–was a real TIFF highlight because they’re all so passionate about the project, and it was interesting to hear how Adams and Bellisario helped Sherman shape the story and the characters.

Then there was the big Bollywood extravaganza, Husband Material (Manmarziyaan). Director Anurag Kashyap, and stars Taapsee Pannu, Vicky Kaushal, and Abhishek Bachchan all came to town to walk the red carpet, and I had a chance to sit down with Pannu, Kaushal, and Kashyap to hear about the production and bringing the film to TIFF.

I haven’t seen a lot of Bollywood films, but I enjoyed Husband Material a lot, partly because it focuses so much on India itself and the food, partly because the characters and their melodrama are so compelling, and maybe especially because Pannu’s character is the star of the story, she is a truly mesmerizing star.

The real surprise of the film is that it is a bit more daring by Bollywood standards, offering up a story that is female-driven, and lush with details that make the characters feel real. They’re all richly drawn, including the side characters, and Pannu’s character, Rummi, is bold and refreshing.

And finally, at least for now, I spoke to writer and director Ash Mayfair about her debut feature film, The Third Wife, which took her five years to make.

Mayfair shot the film in a remote location in Vietnam, to capture the reality of the story, which is set in the 19th century as a 14-year-old girl becomes the third wife to a wealthy man. The cinematography is utterly gorgeous, and the story is profound, exploring this young girl’s new life, how it changes and affects her, and the lessons that are empowering and devastating.

The Third Wife is an incredibly well-crafted first feature, and it’s exciting to me because Mayfair has such a powerful style, and I really can’t wait to see what she could do next.

There’s just not enough space in one post to cover everything, so I’ll have to share more in another blog entry about Freaks, Splinters, and Standoff At Sparrow Creek, plus some of the films that I saw, and that interview I did for a film that wasn’t even at TIFF.

If you’re curious what that film was, TIFF put on a special sneak peek presentation for How to Train Your Dragon: The Hidden World with director Dean DeBlois, producer Brad Lewis, and star Jay Baruchel. And I have to say thanks to TIFF and Universal Pictures Canada for the chance to interview DeBlois and Baruchel before the event. Stay tuned for that video coming up soon.