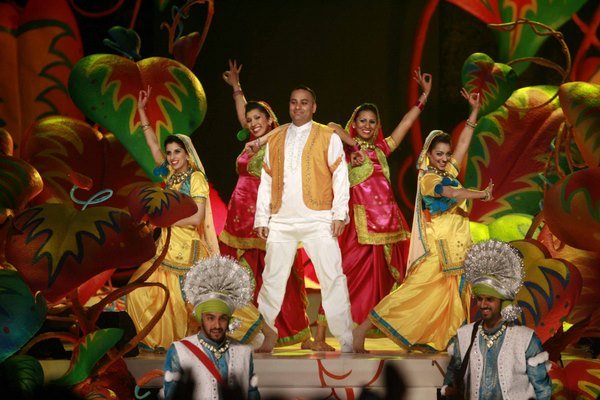 The 2009 Juno Awards have arrived after an hour-long delay thanks to the Amazing Race. So, when the awards finally kick off, what are we treated to, but Nickelback opening the show, again, with pyrotechnics and singing “Something In Your Mouth”.

Am I the only person in Canada who is tired of these idiots? Their crappy brand of redneck rock is dead. Move on. Do honest-to-God rednecks even buy this crap any more?

Russell Peters takes the stage, with a little dance routine, and while this guy is hilarious, I can’t help but thinking… “I’m missing the Star Trek episode of Family Guy for this?”

Peters’ quips, looking at all the weird, multi-colored plants on the stage, “Do you know what the street value of the stage is right now?”

The Barenaked Ladies get a little jab in the opening, making fun of the departure of Steven Page and that he has moved on to “sniff out other work.” But, hey, as he points out there’s nothing like a good Canadian scandal. He just can’t wait for the Anne Murray sex tape: “I for one would like to see her ‘Snowbird’.”

K.D. Lang and Buffy Sainte-Marie hand out the first award, Songwriter of the Year, which goes to the most deserving Dallas Green. You have got to love this guy. One of my favorite performers, and he just does not look the part, but what an amazing performer and writer.

It’s nearly 9:20 in Toronto and Sam Roberts is up on stage performing “Them Kids”, one of my favorite songs from 2008, which seemed to be in every cinema I went to for a while there.

The band puts on a great performance, mostly because Roberts is like a maniac on the microphone, with that frenetic energy he always seems to have bubbling out all over the place.

Hedley presents the next award for Group of the Year, pointing out they have not only never won this award, but they’ve never won any Juno before. Frankly guys, you’re cool, but I don’t know if I’d call you Juno worthy. Thousands of teenagers might disagree, of course.

And speaking of not Juno worthy, Nickelback wins for Group of the Year, commenting that they may just stay up there and smoke the stage after all.

Kreesha Turner, Deborah Cox, and Sarah Slean present for Rap Recording of the Year, with Turner singing off a few lines from her song, “Don’t Call Me Baby”. Kind of lame, but I’ll blame the writers or something. Kardinal Offishall accepts his award via video, and says that next year it will be (and this is an approximate quote) “90% Hip Hop, 10% lifetime achievement awards for Nickelback.” Ha!

Sarah McLachlan, who was honored with the Allan Waters Humanitarian Award, performs “U Want Me 2” to huge applause. It’s a subdued performance to be sure, but she has lost nothing over the last few years since her last album.

Time for a break before Michael Buble…