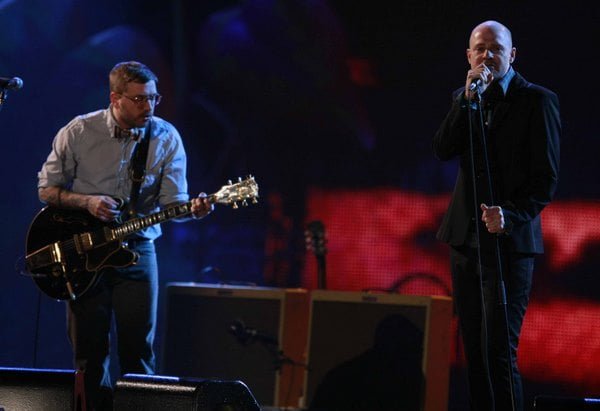 The Juno Awards are still on CTV, and I’m still watching, apparently. So far, not an outstanding year, but it has its moments.

Lights wins New Artist of the Year. Not a groundbreaking choice by any means, but I do like her. That said, I’m really sorry, Lights, but kind of a dumb name. I mean, really, Lights? After just seeing her a couple of weeks ago for Chum’s FanFest at the Masonic Temple, I have to admit she does a pretty great job live.

Next up, The Stills perform “Being Here”, with a maybe kinda dull performance, but man is that a great song. So far I don’t think any of the performers have put on much of a show, but the song choices have been pretty good.

With an odd duet, that was still remarkably cool, Juno winner Dallas Green performed “Sleeping Sickness” alongside Tragically Hip frontman Gord Downie, who absolutely killed the song. So far, by far, my favorite performance of the night, but the night is really only halfway through.

My girlfriend Aisha calls me at this point to talk about the show. So far, she’s not very impressed with the show, and I can really understand why. Unless you love every single one of these performers, why would you watch? And aside from the performances, the show is kind of dull when Peters isn’t doing his shtick. This has been a complaint I’ve held for a while now, but I’ll admit, most awards shows suffer from this problem, and I’m not sure how you hand out awards, and make it interesting.

Now, the next part might be what I call the low point of the night, only because I think they’re cheesy today, but I’ll admit it – I kind of like them. Yes, it’s time for Loverboy to be inducted into the Canadian Music Hall of Fame, and I’m cringing just a little.

I know, I’m sorry – they were huge stars, and their songs are still on the radio… but still… Loverboy? Wow.

Serena Ryder, Crystal Shawanda, and Divine Brown perform together. I feel like I’m saying the worst thing ever, but Divine Brown (who I seriously adore as a performer) sounds really pitchy tonight.

Shawanda was okay otherwise, but, saving the best for last, Ryder rocks out with “Little Bit of Red”. Fan. Tastic. Love that woman, and she really just does not get enough respect.

Presenting the Fan Choice award, Nikki Yanofsky, Tara Oram, and a fan are on stage, and I can’t help but laugh a little.

[Rant]Okay, so Nickelblah (thanks for that one, Adam) wins and I can’t help but think… isn’t this whole night kinda just fan choices winning? Do credible, powerful singers actually win Junos very often, over and above top-selling artists?

It happens now and then, rarely, but not nearly often enough. Which is exactly why the show gets boring, since we keep seeing Nickelblah open the show every three years, and there are piles of lesser-known acts not even getting nominations.[/Rant]

Lights comes from her last name..
Her name is Valerie Poxleitner.
The way you pronounce her last name sounds like “pox-LIGHT-ner”

Sorry, I wasn’t quite clear there. I guess the part I don’t understand is that, if you’re an upcoming artist, you usually want to make it really easy to find you on the web. Try Googling Lights, without a song name, and it’s a bit tough.

Actually, thanks to myspace if you google lights she is the first on the list.

Actually, Lights comes from her first LEGAL name. Yes, her real name is Lights. How do I know this? It’s cause I’ve interviewed her, and it was one of my questions. She is rad, I love Lights.

She only recently changed her real name to Lights. The band name “Lights” came before she changed her name and did come from her last name. I know this because my girlfriend is her cousin.