The year’s best single? “It’s starting to make sense to me” 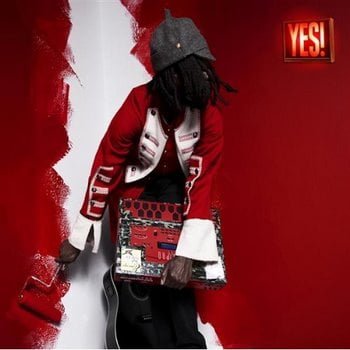 As I type this post I’m listening to the song for 2009. It’s insanely addictive, and even though you don’t know it yet, when this track hits you’re going to wonder why you don’t own this guy’s CD.

The song is “I Wish I Knew Natalie Portman,” the artist is k-os, and it’s really that good. I don’t even know if it’s going to be a single yet (but I’m betting on it), but you can bring on all the other big releases of the year – this is going to be the song to beat in ’09.

“I’ve been on the run, this shadow weighs a ton, it’s starting to make sense to me, I can’t really make you love me.”

Some of you, especially if you’re not from Canada, are going to wonder who I’m talking about. Up until now, he’s been pretty huge in this country, but the world hasn’t really come calling yet. You can find some of his amazing songs (and funny, retro-style videos) from his last two albums on YouTube, including “Sunday Morning”, “Man I Used To Be”, and the new video, “4 3 2 1”.

Yes! is k-os’ fourth album to date, and I think it might be his best, and while “I Wish I Knew Natalie Portman” is an amazingly catchy song, it’s far from the only great potential single. The first one, “4 3 2 1” is an easy hit, and I’m hoping that “Eye Know Something” makes it onto the charts as well.

While it was one of my favorite albums for a long time, Joyful Rebellion is now only a close second compared to Yes! With the new album k-os has really evolved, and the result is a mix of genres and sounds that makes me want to stick the whole thing on repeat for a week.

The only thing that really has to be added about k-os is that he has a funny sense of humor when it comes to his song titles. Like a lot of his other music, “I Wish I Knew Natalie Portman” doesn’t, in fact, mention the title, or Miss. Portman, once, but a recent Edmonton Sun interview explains it all a bit.

Turns out the Toronto rapper, whose real name is Kevin Brereton, is a fan of both Portman and Star Wars, in which she appeared as Padme Amidala but the tune is more about her homeland than anything else.

He basically goes on to say that he was afraid of America for a long time, and between a recent tour that introduced him to the good side of the country, and Obama winning the recent election, made him reconsider his feelings.

“So I Wish I Knew Natalie Portman over this California beat is kind of like I’m ready to sort of immerse myself in that. Maybe it’s not really necessarily about being a superfan of a beautiful woman.”

K-os said he didn’t know if Portman knew about the song: “But I hope she finds out.”

I have to add I’ve also reconsidered k-os with this new album. In the past I was kinda peeved with his occaisonal odd behavior, and I even had one weird/bad experience during the Toronto Int. Film Festival, but it really doesn’t matter. The point is that he can do whatever he pleases, because ultimately, all that matters is that he’s an amazing artist.