A night with Outlaws & Gunslingers 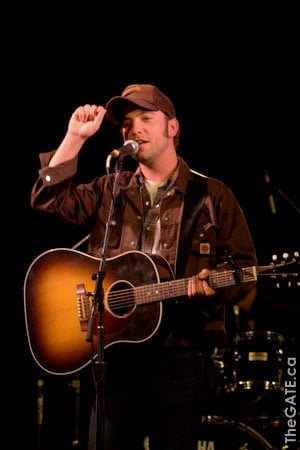 My first night of NXNE felt shorter than I intended, but it was a great freaking evening. I had a string of places I wanted to check out, with about ten different acts I wanted to see, but I knew that wasn’t going to happen.

In the end I went to my perennial concert hangout: Lee’s Palace, where the Outlaws & Gunslingers showcase was featuring a pile of my favorite alt-country performers.

I missed the 9:00 show with Jim Cuddy, Royal Wood, and Oh Susanna, but I arrived just in time to see Kevin Hearn, Jenn Grant, and Jason Plumb followed by Luke Doucet, Justin Rutledge, and NQ Arbuckle.

It was a fantastic set, especially thanks to the effervescent Jenn Grant, and one of my all-time favorite Canadian performers, Justin Rutledge.

Luke Doucet was fantastic on guitar, proving once again that he’s one of Canada’s best guitarists, but it was Rutledge who I think left the best impression, wrapping up their set with a sing-along of “Don’t Be So Mean Jellybean.”

Looking at all the events this year, this is also what I would call an “on” year for NXNE. I sometimes find myself completely uninterested by the festival lineup, but this year that’s definitely not the case.

If the other nights are as good as tonight, it’s going to be a great year.