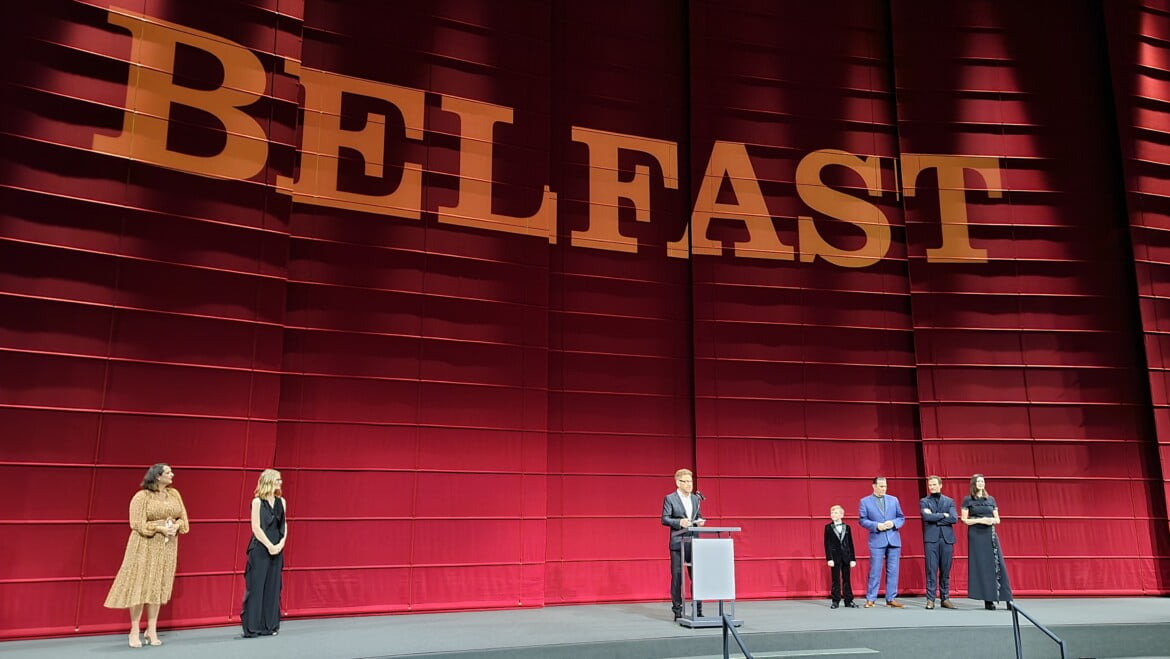 There is nothing like an LA premiere, and Belfast had an incredible evening last night at The Academy Museum of Motion Pictures. It was wonderful, with Kenneth Branagh saying a few words, and topped off by star Jamie Dornan singing “Everlasting Love” at the after party.

The premiere was a glitzy and fun, but the thing that really stuck with me was how positive the night was. Everyone was so energized and happy, and a big part of that was the wonderful, wonderful film, the cast, and the story.

In a world that’s pretty grim sometimes, Belfast is a beautiful, touching film. It faces a dark point in Irish history and finds joy in so many things, as a kind of postcard from the city.

In all of the 20+ years that I’ve been covering film, I’ve been to lots of premieres and big events, and this was my first Hollywood premiere ever. I have to say that I feel very fortunate that my first premiere experience was for Belfast.

Writer and director Kenneth Branagh got up to say a few words, and he was so eloquent about the film.

“This town and this industry have been spectacularly kind to me along a 30-year journey of movie-making,” Branagh said.

The film premiered in Belfast recently, and then Branagh and the stars flew to LA for this premiere, and that’s a trip the director thought was very fitting.

“The film, in part, reflects that same journey, but this time in the mind of a 9-year-old boy who made many trips of refuge and escape to the wondrous worlds that this town created so indelibly for so many of us.”

“I owe Hollywood and its movies a very great deal,” he said. “This film is in part a sincere thank-you for that inspiration.”

Kujawski started the night by heaping praise on Branagh and the heart and soul of the film.

“I think the beauty, the power, and the magic of this film is that it really reminds all of us that no matter how bad things get, the people that we’re close to–our friends, our family, our community–they do more than make the bad times tolerable. These people make these times–no matter how hard they get–still full of love and joy and laughter.”

The film is going to be a big contender for awards season, and I can see why it won the People’s Choice Award at the Toronto International Film Festival this year. There’s also a lot to talk about, from the performances, music, and cinematography, to the direction.

And then there was the after party. I’ve been to a few film parties, but this one was so much fun, and it was so relaxed. Branagh and the cast were hanging out and socializing with everyone, Dornan jumped up on stage and sang “Everlasting Love,” like his character does in the film, and a band played throughout the night.

Thank-you to Focus Features for the invitation, and for the incredible experience. Thanks as well to the Critics Choice Association for the way they work with the film industry, and help make opportunities like this possible.

As I head off now for the Belfast press conference, I’ve got “Everlasting Love” stuck in my head, and I’m hitting refresh on Spotify waiting for the soundtrack to appear. Stay tuned for my film review coming up this week.