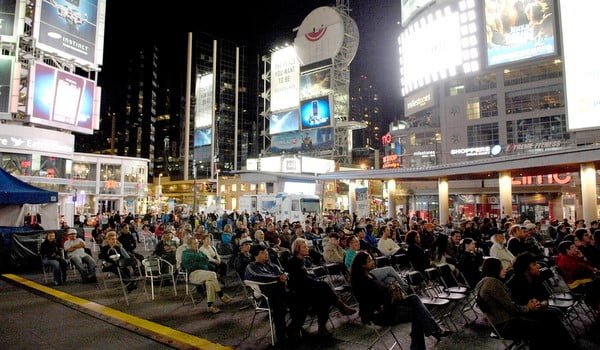 This is pretty much it. Take a deep breath and dive in, because for the next ten days the city of Toronto is going to be filled with wonderful mayhem.

If you’re not tripping over red carpets, or lineups for some of the 273 feature-length films, you’ll probably see a crazy festival-goer running from one event to another, or perhaps even an international celebrity on their way to one of said events.

Starting tomorrow, and going until September 19, being in downtown Toronto is going to make it hard to ignore all of the buzz. It’s intoxicating, and invigorating, but it’s also a festival that invites everyone to take part.

Take, as one of the best examples, some of the amazing things happening at Yonge & Dundas Square.

Starting tomorrow, September 10, at noon you can check out dozens of concerts and film screenings, and it’s all free. On the opening day alone you can catch the film Leonard Cohen: I’m Your Man, the silent film Steamboat Bill Jr., a live feed from the gala red carpet for Creation (which is taking place at Roy Thomson Hall), and a concert put on by DJ Champion and hosted by Measha Brueggergosman.

That’s really just the start of it – there is a lot going on this year for anyone who wants to come out, and if you’ve got a few minutes, or a few hours, I highly recommend checking something out.

Personally, I’ll be down there on Saturday, September 12 for the Toronto Zombie Walk, which is going to recognize George A. Romero, and his new 2009 TIFF film Survival Of The Dead. Although I didn’t find a lot of details on this, you can check out www.torontozombiewalk.ca for more info, which confirms the walk will gather at 3:00 PM at Alexandra Park (Bathurst/Dundas) and finishes at Yonge & Dundas Square at 6:00 PM in time for a free screening of the classic Night of the Living Dead.

I’m also seriously excited that U2: Rattle & Hum will be playing on Thursday, September 17, and there’s going to be a roller-derby event on Sunday, September 13 (with some of the film’s stars) in honour of Drew Barrymore‘s movie Whip It.