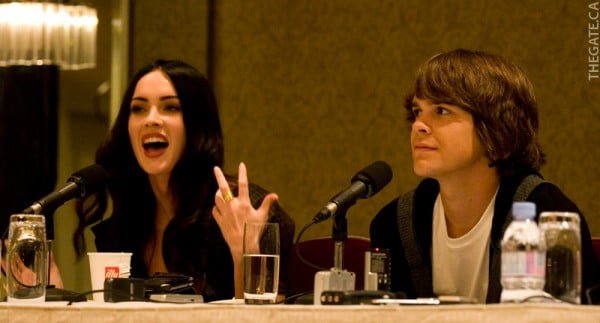 It’s almost a day later, and I’m just getting back online to talk about everything that’s been going on at the Toronto International Film Festival. The only other bad thing is that last night did not go as planned.

I arrived two hours before anyone was set to show up on the red carpet for the Midnight Madness screening of Jennifer’s Body and got a respectable spot in the line of photographers. That said, it was a tight fit, and people started piling in as arrival time neared.

Things got bad though when the cast and filmmakers arrived, with a lot of “cling-ons” I might add, and promptly filled up the red carpet. It was wall-to-wall people, and no one seemed interested in bringing the stars to the photographers, especially not in the case of the big names. What was worse was that two photographers with red carpet access, who can actually walk around the carpet, were given multiple chances to get some great shots. As you can imagine, this did not go down well with the assembled photogs.

All in all, a very disappointing experience, and I walked away with only a dozen decent photos, and none of those were of people I really went for. Definitely a fail for the red carpet, and if I had known I could have been at the opening night party instead.

Ah well, such is life. Basically, that also means that if you’re wondering where my shots are from last night, you’re not going to see very many.

The only bright side of the night was that Mr. PR from Fox, Peter, invited me to stay for the screening, but I had a column to write, so I had to pass. Still, definitely appreciated the offer.

That brings us to today, which has been very, very good. Right off the top of the morning I caught the screenings of the Coen‘s A Serious Man and then Jennifer’s Body.

A Serious Man was seriously contemplative, clever, funny, but maybe a little plodding. Great cast though, and a very challenging ending too. It’s hard to sum it up in a few words, but it was definitely a great film. The Jewish focus is also very refreshing for a goy like myself, and the character actors used throughout are brilliant as well, but I think the amazing part is how lean the film is, never wasting a moment. It’s a definite must see, especially for film fanatics.

Jennifer’s Body on the other hand has what I consider the spark of genius, but stumbles at some of the best moments. The layers of beauty on top of horror (or vice versa) are intriguing, and it has a decent sense of humour, but it almost needed to be funnier to flow better. It also seems like the director, Karyn Kusama, just wasn’t a strong enough filmmaker to pull off this ballsy script by Diablo Cody. Cody also could have been a lot more clever with her script, mind you, but in the right hands I think it could have been an exceptional horror-hybrid.

After that, I went to Fox’s junket-style press conference for Jennifer’s Body, which was divided into two segments with the filmmakers (Karyn Kusama, Diablo Cody, and Jason Reitman) coming out first, followed by some of the cast (Megan Fox, Amanda Seyfried, Johnny Simmons, and Adam Brody).

While I think the most interesting part of the press conference was listening to Cody talk about her inspiration, and the general making-of moments the three filmmakers got into, the actor’s portion of the event was pretty impressive. For starters, Megan Fox is very disarming, and she is also surprisingly self-depricating, and well-spoken. She had some interesting things to say about her career, which I’ll definitely be posting soon.

And lastly, at least so far, I went to the Men Who Stare at Goats press conference with George Clooney, Ewan McGregor, and Jeff Bridges, among others. Clooney was entertaining as always, but more often than not he was deflecting questions. That said, when the right questions came along he dove right in. Unfortunately, a lot of the others up there didn’t get to say nearly enough, but it was a great look behind the scenes of how the film came together. Author Jon Ronson also had some entertaining contributions about the surprising realities mentioned in the story.

Now, I’m just downloading photos before I go to a party for Ontario filmmakers, featuring some really cool directors and talent. After that, there’s the Suck red carpet and party, and then if all goes well I’ll be home in time to post some photos.

Wish me luck, and stay tuned for updates tomorrow about any on-the-spot interviews I get. I’ll also be on Planes, Trains, and Automobiles on AM 640 talking about the festival tomorrow at approximately 11:30 AM.