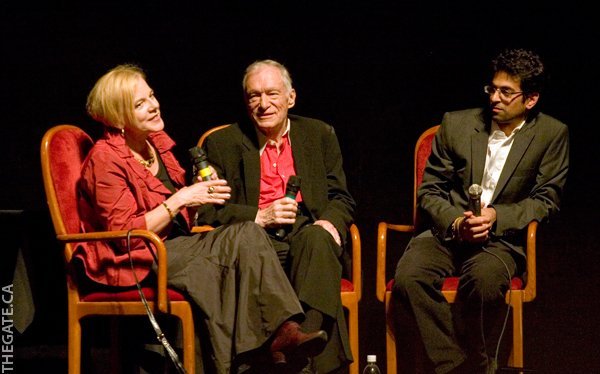 Yesterday was an entertaining day at the Toronto International Film Festival, and kind of a big deal for me. I mean, all of the festival is a big deal, but this was a big deal.

First off I interviewed Sam Neill for Daybreakers, which was actually my second interview with him (I was lucky enough to have chatted with him last year for Skin).

He was fantastic once again, although I happened to be doing the interview at a roundtable with one journalist who thought he’d rather talk to Neill than hear what he had to say. That’s an unfortunate trend here at some TIFF events, but I bare him no ill will, I just got tired of hearing the guy take a minute to get to a question as he discussed his own views on film.

Anyway, Neill had some interesting points, including how the Spierig brothers (Michael and Peter), who directed Daybreakers, are actually identical twins, and the only way he could tell them apart was that one brother is about three or four pounds heavier because he has a girlfriend who cooks for him. That, and when I asked Neill who his favorite villain was from film or literature, he said it would have to be Jean-Baptiste Grenouille from the novel Perfume.

After that, I was off to the Elgin theatre for the main event of my day: the screening of Brigitte Berman‘s documentary, Hugh Hefner: Playboy, Activist and Rebel.

Normally, when I cover red carpets, I head right for the photographer’s area because there are so many media outlets competing for interviews, but I was not going to miss the chance to meet Hugh Hefner, who was actually in town for this event.

Arriving about two hours early, I spent the time leading up to Hef’s arrival thinking about what I was going to ask him. Time was tight, so I wanted a good question. When he showed up, with his three blond girlfriends I might add, he zoomed through the red carpet at a brisk pace, so I barely had time to let it all sink in before he was in front of me, shaking my hand.

First of all, I try to keep my cool throughout the festival, but all I could think was, “Hugh Hefner, the Hef himself, the man behind one of the most well-known iconic, pop culture establishments in the world, just shook my hand.” I didn’t even offer to shake his hand, I thought it would be rude. He just stepped up to me with that wry smile, and shook my hand.

I digress. Jumping into it, I asked him how he felt people’s perceptions of him had changed over the years, and what he thought the future held for Playboy. He gave decent answers, but with time short, I think it was a tough spot to answer in-depth.

When the interviews ended, I then had the chance to go in for the screening of the film, which was packed, and kind of buzzing around Hef’s presence, like he was some sort of King bee, in fact. People were very excited, especially when they found out he was doing a Q&A after the film.

What I appreciated right off the top was that, when the pre-roll segment ran showing a historic film moment from Toronto, to celebrate the city’s 175th anniversary, there were quite audible ‘Ohhs’ and ‘Ahhs’ when the credit ran explaining that they had just seen a clip from the 1920 Santa Claus Parade. Having seen a number of films with the press, it was wonderful to finally see one of these clips run for an audience, most likely an audience that was also mostly made up of Torontonians.

The film itself was kind of a unique documentary, and Berman clearly spent a lot of time putting it all together. It’s an historic account of the man’s life, and after seeing it I am a bit shocked to realize that we don’t give him enough credit. There could have been more included to properly weigh out some aspects of his life and career, but I think the point was simple; Hefner contributed a lot to social change, and some of that is much bigger than just sex, nudity, and even free speech.

Dr. Ruth, in fact, makes an appearance in the film, and she makes one of the more memorable points in saying that, perhaps Hefner would be more respected for his accomplishments if his personal life hadn’t gotten quite so tied up in the image of his company and, more specifically maybe, the magazine.

More coverage to follow. I’ll try and get something online about today before my next interview and the Precious red carpet tonight. Video, interview pieces, and other longer items will go up throughout the week.

Because is IS all about YOU – “W”. Give me a break – and I am total advocate for the disenfranchised – worked for as many years as you likely have been alive, for the rights of women and children. This film was compelling and elightening – Overstated? Yes. Comparing Hugh Hefner to Martin Luthur King or John Lennon (even loosely) is pushing the envelope. But did he break racial and societal barriers? ABSOLUTELY. Was this a good thing? Hell yes. I enjoy sex, myself – can’t speak for you – And I’m glad that my social circle is diverse. In the areas of racial equality, free speech and expression – Yeah. And what an amazing life this man has lead – decades of being there – being part of it. Like it or not, he is a pop culture icon – and don’t negate that. Longevity counts – Susan Brownmiller – my guru of the domestic violence movement back in the day – (and I’m just saying, sisiter, put a bra on, whether you “have” to or not – you’re making us all look bad) – acknowledges that Hefner has longevity. I’ve learned to enjoy the world without getting pissed off about everything or taking it personally or thinking that it is directly related to me. Hugh Hefner is no moral role model – and deep down, I like that – I’ve done many good things in my llife but, God forbid, anyone should consider me a “role model” Hef is’s a rebel – I might find him distasteful on alot of levels, but I recognize his remarkable influence. I’d better served be spending my time blasting the catholic church for their (to this day) deplorable, disgusting disassociation, if not defense, of their twisted, criminal clergy – now THAT disgusts me.

What is with the angry note? Did you even read the post? What are you even angry about? You respond as if I attacked him, or as if I praised him too much. Chill out. How did my note above “negate” anything?

As far as the comparison to John Lennon – yeah, it pushed it a bit far there, but I’m not sure it’s that far off in terms of advocacy. The film didn’t call him a great creator like Lennon, it called him an advocate for free speech.