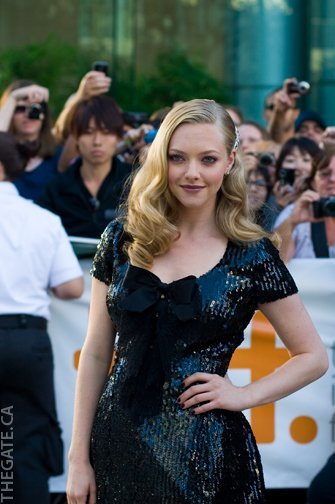 Amanda Seyfried on the red carpet for Chloe

Sunday was a decent day at the festival, but another one of those days where I realized there are just too many great things going on during the Toronto International Film Festival to make anyone feel accomplished. No matter how much I do, I’m missing ten other amazing events.

For instance, Sunday I had the choice to go check out Creation, or Defendor, both of which were screening at the same time. While I definitely wanted to see Defendor more (with Woody Harrelson playing a wannabe crime fighter beside Kat Dennings), the serious buzz was on Creation and Paul Bettany‘s tortured portrayal of Charles Darwin, so that’s what I ended up seeing.

The film wasn’t exactly disappointing, but it failed to capitalize on all of the story elements that should have been far more poignant. Bettany is very good as Darwin, and Jennifer Connelly plays his religious wife very well, but the crux of the story is whitewashed with a pretty standard biopic rendering. The story is worth watching, but it’s vastly disappointing considering it was a massive moment in history. To give the film credit though, it has beautiful, dynamic cinematography, a very strong supporting cast, and a nicely non-linear plot.

After the film, I did a quick interview for AM 640’s Planes, Trains, and Automobiles, talking with Arlene Bynon and Christopher Heard about some of the great hotspots in Toronto to experience during the festival. As I said to them, my favorite during the day has to be in and around Yorkville, including hanging out at one of the local coffee shops, like Starbucks. At night though, I’d really recommend grabbing a drink at the Windsor Arms Hotel, or going down to Queen West for some time at the Drake Hotel.

My afternoon was spent posting content before I went over to my interview at the Intercontinental with the Spierig brothers, who directed Daybreakers.

Before the interview though I ran into Chris Alexander, writer for Metro Toronto and Fangoria magazine. We spent our time chatting about the festival, some of our favorite films, and then had our interviews with the directors.

Although I can’t speak for Chris, the guys were pretty interesting, but very different. For the most part Peter was very open and talkative, while it seemed to be a bit harder to get Michael to open up. At the end I also complemented them on the film, to which Michael asked if I really meant it. As he said, a lot of times critics say they love something to a filmmakers face, but when they write their review, they actually rip it to shreds.

The thing is, I just can’t imagine why you would go out of your way to say you loved a film, when you don’t. Interviews can be weird, and you’re often rushed in and out before you get time to adjust, but there’s just no reason to fake your opinion. To put it honestly, Daybreakers is a lot of fun, and it’s overall pretty fresh and exciting. As I said to them, I had some problems, but overall I love it. I certainly wish the middle had been as well crafted as the beginning and end, but the action, characters, and storyline carry the film all the same. I also really appreciate that the film puts a very unique spin on a very old genre concept, placing the vampires in the future, and making humans the underground species.

After the interviews Chris and I ran to the screening of Bitch Slap, which was just starting to roll as we walked in. Chris already did an interview with the ladies from the film, but I’ve got an interview lined up for tomorrow.

Billed as a big action/b-movie dwelling among the land of the classic exploitation films of the 60s and 70s, Bitch Slap certainly is odd, but I won’t deny it’s fun too. With lots of skin, some cat fights, blood, and then some more blood and skin thrown in for good measure, the film could have been better, but I still enjoyed it for what it is – a seriously tongue-in-cheek action adventure.

When that was done, I ran down for the red carpet arrivals of Atom Agoyan‘s Chloe at Roy Thomson. In attendence were stars Julianne Moore, Amanda Seyfried, Agoyan’s wife Arsinée Khanjian, and Ivan and son Jason Reitman.

As I already mentioned in another blog entry, I then stayed for the second Roy Thomson red carpet, the Oprah Winfrey-produced film, Precious. It was easily the biggest red carpet happening at this year’s festival, and I think I got some pretty great shots. I only wish that Oprah and Mariah Carey had stayed out with the crowd a bit longer.

And that brings us up to today, which has been a bit quiter. I screened Ruba Nadda‘s drama Cairo Time first thing in the morning, chatted with Talk 820 about the festival so far, worked for a couple of hours on typing up interviews and fixing photos, and then met with Ruba for an interview.

The sad thing is really that it’s all down hill from here. The festival always starts with a massive bang, and goes out with a whimper. There are still some cool stars around over the next few days, but things really taper off quickly.