Will ‘Halo 3: ODST’ live up to the challenge? 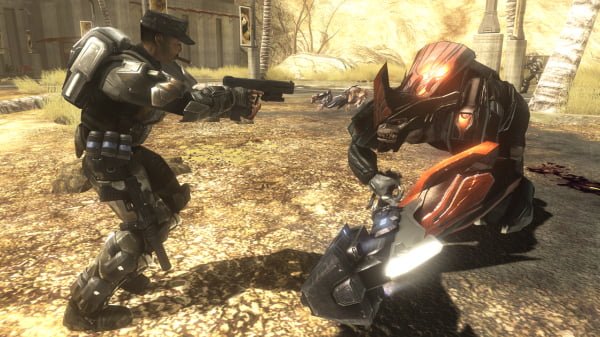 Halo 3 fans probably don’t need much coaxing, but tomorrow, September 22, Bungie’s Halo 3: ODST makes the drop onto store shelves, and I’m very curious what the response is going to be like.

This is a big franchise for the Xbox 360, with some promise of filling in a few gaps, but after Halo 3 it feels to me like the Nintendo-ification of the franchise – that is, what I consider a pointless retread of gameplay we’ve played before, just to pop out another title with a few new tricks.

Last Thursday I had the chance to check out the game at Microsoft’s PR offices here in Toronto, with a couple of dozen other game journalists, and I will admit that it’s not quite the game I expected. It’s in fact better in a lot of ways.

Playing as an Orbital Drop Shock Trooper with the United Nations Space Command, you are a rookie, dubbed “the Rookie” in fact, who is seperated from his team. Stumbling across the now devastated city of New Mombasa, which has just had the snot kicked out of it, you’ll try to reconnect the dots, explaining what happened to your teammates.

The clever part, and this is really a great example of developer Bungie’s work, is that each time you find a clue to what happened to your teammates, you jump back to the battle that tore through the city and replay the moment as that individual.

While the campaign gameplay is fairly short, under five hours, Bungie have also changed things up a bit by putting you in the role of soldiers who are not quite as advanced as the good old Master Chief. You take more damage, and will have to be much more careful since you don’t have the regenerating shield of the Chief either.

The game also comes with a new multiplayer mode dubbed Firefight, where you and a team of three other gamers take on waves of baddies. This is made much more interesting thanks to skulls, which you may recall from the other Halo games, that will randomly activate to handicap your fight in different ways.

Although I’m waiting for my review copy, I’m still on the fence about this title. Halo 3 was by no means a perfect game, but it was a high point for Xbox, and so far I don’t see anything nearly as clever coming out of ODST. That’s by no means definitive, since I’ve only played the game briefly, so stay tuned for a review soon.

In the mean time, what do you think of Halo 3: ODST? Are you excited? Did you get a chance to play it tonight at the Toronto event? Whatever the case, let us know what you think.