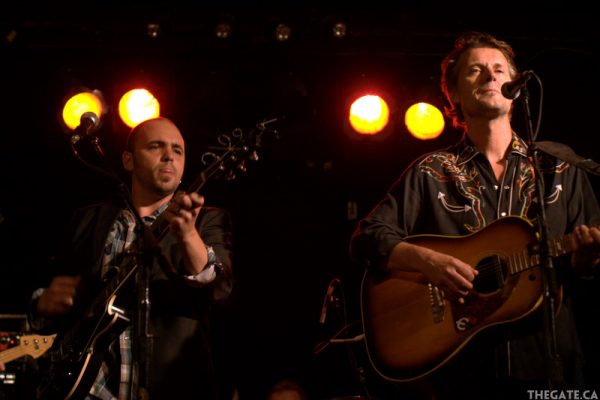 Six Shooter Records put on their Outlaws & Gunslingers set tonight at Lee’s Palace for NXNE, and it was once again just plain awesome.

I missed Andy Kim‘s opening set, and I sadly had to leave before the midnight surprise guest, but I can’t say enough about the artists I did see.

At nine there was Justin Rutledge, Oh Susanna, and the brilliant Danny Michel. They were followed at ten by The Skydiggers’ Andy Maize, with Amelia Curran, and the very slick Royal Wood. And then at eleven was Jim Cuddy, Hawksley Workman, and Colleen Brown.

The night was really simply incredible. The song choices were brilliant (Workman’s “Warhol’s Portrait of Gretzky” was maybe the biggest song of the night — it got an insanely great reaction from the crowd), and the singers all worked quite well together.

I think the only oddity was Workman and Cuddy sharing the stage. Their music didn’t quite go together, since Workman is boisterous, and Cuddy is earthy and grounded, but they still capped off the night perfectly.

I’ll post more photos tomorrow, and round up my list of favorite bands for the rest of NXNE as well.