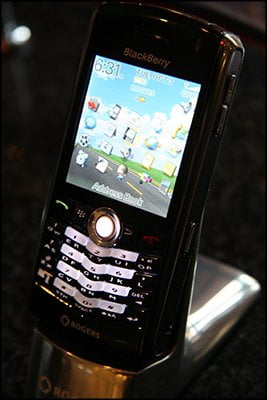 This has been a great month to be a fan of technology I must say – already this week I’ve been out to no less than 2 events for cool gadgetry. One of the events was for the new Pearl Blackberry – Research In Motion’s consumer model of their popular phone/data device. It’s pretty cool with great features and apparently it’s only available through Rogers right now – but the event was kinda… boring. I mean, how many events can you go to at a bar where all there is to do is look at the device in question and wonder how drunk all the attendees are?

That said, I really want one. They’re really awesome looking, but they won’t come cheap. For a 3-year contract the phone is $249, and there’s no way I’m switching away from Bell until Rogers will let me keep my current cell number.

The second event was far more enjoyable, but still kind of on the poor side of things. PlayStation had a little shindig to push a bunch of new games they have for the PSP and the PS2, but there wasn’t even a hint that they’d be releasing the PS3 this year. Nothing. Nada. Zip. Zilch.

Now, to be honest, I’ve recently become an Xbox 360 convert. But part of that is also because the Xbox folks have done an amazing job of making me want to love everything Xbox. In comparison, I didn’t speak to a single PR person at yesterday’s PSP event, and aside from Justice League Heroes and God of War II, I didn’t see much that got my blood going.

Perhaps I’m being a bit hard on them, but if they had even hinted at some news about the PS3 I might have been more interested. Just a hint folks – the PSP and PS2 are great, but no one really cares, do they? We’re all really just waiting for the next generation of things…