Why the Indies rock 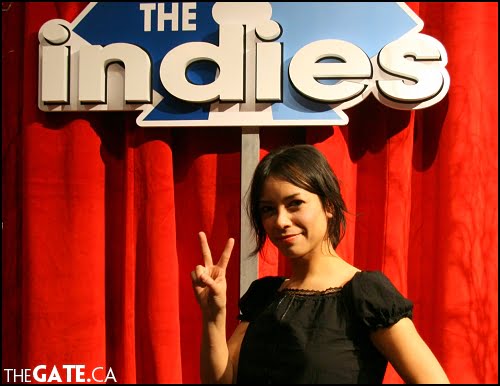 Emm Gryner
For the 7th year in a row I kicked off my whole Canadian Music Week experience with the Indies, but I have to admit that things have changed a lot over the years. For one thing this year’s venue, the Docks, is decked out in full award show spelndour for its TV appearance (On SunTV). And while the set isn’t quite as elaborate as last year’s train wreck style (literally), it’s certainly of big enough to make the Indies look as legitimate as it gets.

The only trouble was that a few minor flaws prevented it from being quite the success it could have been.

For one thing, when I arrived around 8:00, when things were set to start, there were only a handful of fans. VIPs were thick on the carpet, but actual fans were rarer than ever. Compared to last year’s turn out, which I was rather impressed by, it was kind of weird actually. Then again, how many people do you know that are willing to trek out to the Docks in the midst of winter when the only reliable transportation to the area is by car or taxi (I took the only bus that went out there – which rarely comes on-schedule, and drops you off a good 15 minute walk away from the venue).

But then the real kicker was when 8:00 passed with no show, and then it was 8:15… 8:30… and finally 8:40 before we got an announcement that things would start in 10 minutes. So, a full 50 minutes late the show began. Luckily, the most-excellent Jully Black was on hand to host the event, and it didn’t take long for her to thaw out the crowd.

Once things got rolling, it turned out to be a good night, with only a few technical issues throwing things off a bit (like mic trouble during Hellogoodbye‘s set, and a video playing in the middle of Neverending White Light‘s set).

Performances by the likes of Hall of Fame inductees Rough Trade, along with DJ Champion, and Cadence Weapon kept the night alive though. And ultimately, that’s why I love going to the Indies. While I love what the awards are all about, celebrating great independent artists, the performances will always be the best part of the night. Adding a huge exclamation to that fact were rockers Wolfmother, who turned out to be my favorite act of the night. They took the stage just before The Stills (who closed the show with a full performance) and managed the most raw and rocking set I’ve seen in ages.

While it was kind of a long night, I’m definitely glad I went again this year, but down the road I hope they can come up with a better venue than the Docks. It’s not actually that the Docks is a bad space, but with no easy transportation to the venue, I’m betting it affects turnout. My vote for next year – either start running shuttle buses to increase attendence, or put on the Indies at a real venue, like the Mod Club!