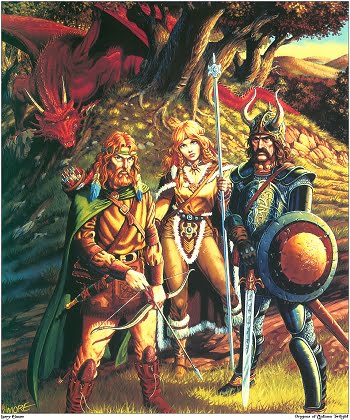 I’m feeling just a little freaked out right now. I’ve been hoping, and dreaming of the day they’d make a movie based on the Dragonlance Chronicles, but it seemed like it was just never going to happen. Well, as it turns out, it’s done. According to IMDb a film based on the first book, Dragonlance: Dragons of Autumn Twilight, has already wrapped and is in post-production with a scheduled release date of this September. The only catch is that it’s animated, but I’m still really blown away.

Most of the names I don’t know what to say, but Michael Rosenbaum as Tanis?? Lex Luthor is going to play Tanis? I think Rosenbaum is amazing on Smallville, but I was still really surprised about that one. And Kiefer Sutherland as Raistlin should sound amazing, but I’m a bit unsure just because… well, just because. He’s got a perfectly dark, gravely voice for that character though.

My only real hope is that well, it’s not too cartoony. Dragonlance is an intensely dramatic story. People die, characters suffer, and well, I’d hate to see it rendered completely down to something like He-Man.

Anyway, wow – I just had to ramble on there for a minute and say that I just hope all three books get made into movies. They’re brilliant stories, and this is a long overdue release. Now I just have to wait and see what happens about the Ender’s Game movie… next year, maybe?

Oh, and check out www.dragonlance-movie.com for the official website.