‘Spider-Man 3’ stuck in its own web 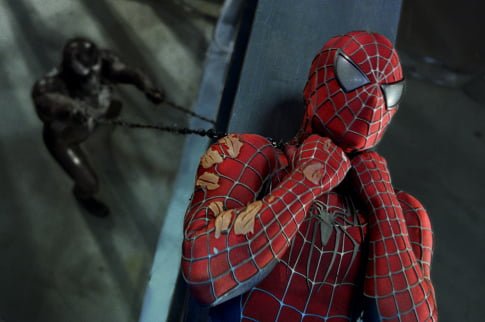 For the last week I’ve been keying myself up for a screening of Spider-Man 3 that Sony was putting on downtown. I watched the second movie again, read up a bit about how the film came together, and was ready for whatever director Sam Raimi could deliver.

And truth is, I probably had too much faith in Raimi. He’s a cool director, but he seems to love doing cheesy stuff in his movies, and while it was funny, well, it was too cheesy.

I can’t really review the film yet, but it’s kind of all over the place, silly, and even a bit anti-climactic. I loved parts of it – lots of the film in fact – but it’s a mess that I’m not even sure will hold up well this summer during the rush of blockbusters.

The one thing I will say is that while Venom isn’t around for long – he’s still awesome, and Thomas Haden Church is commendable as Flint Marko/Sandman, and Bryce Dallas Howard is very easy on the eyes. The “birth” of Sandman and Venom are also very, very cool scenes (There’s actually something oddly touching about Sandman’s birth).

Comic fans will probably dig the references in the film, but expect to be jolted between good scenes and fodder to keep the story running. Don’t be too surprised if the screen feels a bit too full of half-formed characters too.

Stay tuned for a review May 4 when Spider-Man 3 opens in theatres.