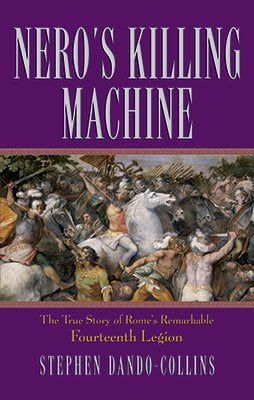 In the past few years there has been an upsurge in the number of films and TV presentations and books on Ancient Rome – Ridley Scott’s monumentally successful film Gladiator was a bold move in the lowest-common-denominator Hollywood landscape of today – then the John Milius conceived Rome on HBO was an even bolder move. This epic, expensive mini-series explored ancient Roman and the Roman Empire in a way that we had not seen it portrayed before on screen. Filled with sex and violence of the most graphic nature, the series didn’t concentrate on that but on the personalities of those involved with the intrigues and the political moves of the times.

Which brings me to one of the coolest novelists out there right now – Stephen Dando-Collins. Dando-Collins is doing for ancient Rome and its characters in novels what Rome did for TV viewers – only Dando-Collins has taken in many steps further thanks to his tireless and extensive research and an ingenious writing style that takes the reader inside the day to day existences of everyone from Julius Caesar to the average Roman citizen. I had the wonderful opportunity of asking Mr. Dando-Collins about his work recently – about his fascination for the period and why he thinks others seem interested in what went on in ancient Rome as well.

Always a curious guy, Dando-Collins was born in Australia but his fascination with the Roman Empire didn’t begin until his move to England. “I moved to England at the age of 20,” said Dando-Collins. “It was with the intention of haunting museums and historic sites throughout Britain, which I did at every opportunity. But living in Essex, and regularly visiting Colchester and St. Albans, I was stunned to realize that relics from the Roman province of Britannia surrounded me. I was living in a pocket of the Roman Empire. I began to seek out Roman inscriptions, particularly on grave markers, always asking myself, ‘Where are you from? What sort of person were you? What did you do? And why?'”

But why write fiction? “The noted historian Sir Ronald Syme once said, ‘If history is to be written at all, it must be written with the violent and complex reality of serious fiction,’ I certainly agree with that and found it absolutely correct where it came to writing about the Roman Empire.”

Dando-Collins chose to focus his attentions on the deeds and doings of the legions of the Roman army – the thought was to write a series of books based on the famous Roman legions – but his publisher would not commit to anything beyond the first installment he proposed – the startlingly entertaining and well written Caesar’s Legion that detailed the might 10th Legion that served Julius Caesar – he had to write that book as a stand alone volume. Before waiting to see if that book would sell, Dando-Collins wrote a second book anyway – this one focusing on the 14th Germina Martia Victrix Legion – that book, more violent and dark, was called Nero’s Killing Machine. So when Caesar’s Legion came out and sold well all over the world, the publisher, Wiley, asked for a second – to which Stephen Dando-Collins answered, “Funny you should ask…” Nero’s Killing Machine sold well the world over which led to a third and a fourth volumes of the legion books. Next came a personal favorite of mine called Cleopatra’s Kidnappers that was about the 6th Legion followed by Mark Anthony’s Heroes about the 3rd Gallica Legion. His most recent book however, Blood of Caesars, does not focus on a legion but on an event – the murder of Germanicus, brother of Claudius and father of the lunatic Caligula.

And why do people seem awfully interested in this stuff right now? Could it be that there are a lot of parallels between where humanity is at now and what it looked like during the fall of the Roman Empire? “I think that 9/11 and other terrorist acts and the quagmire that is Iraq have given people a general feeling of powerlessness in Western society. Perhaps people feel that the ancients were more in control of their world than we are in control of ours.”

If you dug the series Rome, as I certainly did (although I liked the first season a lot more than the second) then you will love the novels of Stephen Dando-Collins. I would suggest you read them all, although they need not be read in any particular order. In my case I started with Caesar’s Legion then read Cleopatra’s Kidnappers before devouring Nero’s Killing Machine – I was all over Mark Anthony’s Heroes when it came out and now have just finished the complex and resoundingly memorable Blood of Caesars. When you read a book by Stephen Dando-Collins your are reading the work of a guy who just loves his subject and is just as passionate about doing the research as he is in actually writing the book. That shows through in virtually every line. His books are so vivid and so rich in detail that I find myself thinking about his characters when stuck on the subway or being caught briefly in the rain – I imagine the life of the Roman legionnaires that Stephen Dando-Collins so magnificently recreates in his books and marvel at just how tough those guys were, and how determined to succeed in their objectives they were.

But I will leave the last word on his work for Mr. Dando-Collins himself – “The legion books have allowed me to be a full-time author, and have allowed me to indulge my curiosity about other fascinating people, places and periods in history, and not just that but I get to travel the world researching them as well.”

Dando-Collins plans on expanding his scope to include Native American history and the history of the struggle between tycoon Cornelius Vanderbilt and adventurer William Walker for control of Central America. But until them – read his Roman legion books, they are the best there is in this particular genre.