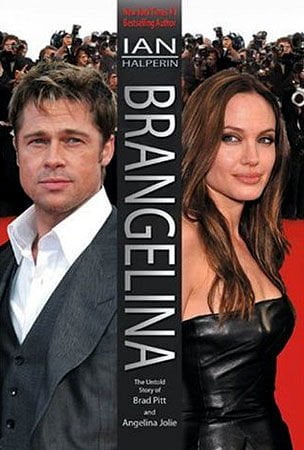 Montreal author Ian Halperin is back with a new book called Brangelina: The Untold Story of Brad Pitt and Angelina Jolie, whichs delves into the lives lived behind the shiny, glossy image set forth by Angelina Jolie and Brad Pitt.

Halperin has knocked his last two books out of the park – first with his fascinating look at the life of Cirque du Soleil creator Guy Laliberte and then with his book Unmasked: The Final Years of Michael Jackson right after that.

Brangelina is the same kind of explosive, incendiary book but as with those two previous books in particular there is a sense of balance as well. Halperin isn’t dismissive of either Brad or Angelina and acknowledges not only their accomplishments but their charitable contributions, both in terms of cash, time, and in using the power of their celebrity to help others.

But the focus of this book is on the carefully crafted and almost entirely false image the pair have created as the loving parents of a multinational brood of children who circle the globe doing the good work of the United Nations and every once in awhile step before the camera to make a film for eight figure fees.

What is very interesting in the book is how Halperin details the startling transformation in Jolie; from the troubled young woman living in the shadow of Oscar-nominated star/actor/father Jon Voight, who sought solace in wild S&M sex and self-injury, to a respected Golden Globe and Oscar-winning young actress, and on to United Nations appointed special ambassador. But what Halperin maintains is that the saintly appointed Jolie of today is just as dark, just as strange, as that young confused, rebellious woman, only now she is rich and powerful enough to create the kind of image she wishes people to see.

She has admitted many times that she pretty much always falls and love with and becomes involved with someone she works with in a film – her first marriage was to British actor Jonny Lee Miller whom she co-starred with in Hackers and her first admitted lesbian relationship was with actress Jenny Shimizu whom she co-starred in Foxfire with. However, when it came to the speculation that she and Brad Pitt have become involved during the shooting of Mr. and Mrs. Smith, the spin machine took over and it was denied even though it was clearly true, which indicates that the outspoken Jolie of the past has been replaced with a new, image-conscious Jolie.

The thing that sets Ian Halperin apart in his work as a celebrity profiler is that he attacks his work with the zeal and the inquisitiveness of an investigative reporter. Halperin interviewed 900 people in research for this book and even went so far as go undercover and pose as a suicidal patient checking himself into the Stewart and Lynda Stewart Neuropsychiatric Hospital in Westwood, the same facility that Jolie was treated in, to seek some deeper inside information.

Brangelina is a real page turner, each new strange thing Halperin reveals makes you want to keep reading to find out how each of these strange facts or strange happenings connects with the Hollywood power couple as they are known today. But the book also suggests that the façade is beginning to fray around the edges and that the whole traveling circus is about to unravel – Halperin and other insiders interviewed for the book predict that the strange saga of Brangelina has about twelve to eighteen months left before it all collapses. Given Ian Halperin’s track record in predicting the outcomes in the lives of his subjects, I am sure a year from now you will be hearing about this book again.