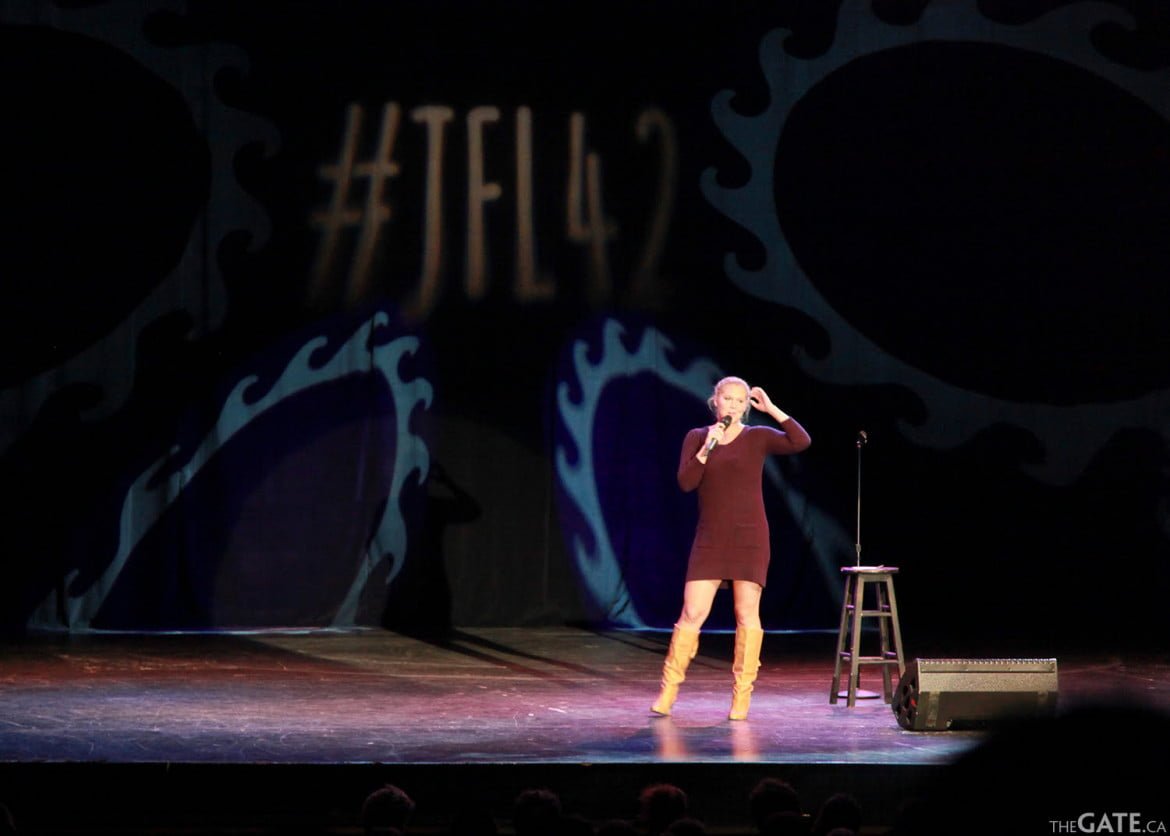 The first-ever JFL42 festival hit the streets of Toronto from September 21 to 28, bringing together comedy, music, dance, art, and technology in a diverse mix of 42 shows around the city. For most festival-goers though, the focus was definitely on comedy, with shows by the likes of Louis CK, Amy Schumer, Patton Oswalt, and Todd Barry.

Here is my recap of the shows I caught at this year’s festival, all the way from a funny set that featured thinker and environmentalist David Suzuki, to the biggest show at JFL42 by Louis CK.

Going into this show, I don’t think many people really understood what was going to happen. As Monkey Toast host Ron Tite admitted at the beginning of the set, everyone was probably wondering if David Suzuki was going to come out on stage and do 45 minutes of stand-up. Of course that’s not how it worked, but the truth might almost be stranger.

As it turns out, Monkey Toast is a talk show that takes place on stage, where the host interviews a celebrity–in this case, David Suzuki–and the comedy troupe improvises skits based on that interview. The players for this show were Lisa Merchant, Jan Caruana, Paul Bates, Kerry Griffin, Herbie Barnes and Aurora Browne, and they were in good form considering the strangeness of the set.

Among the skits, the troupe explored a ninja dry-cleaning service, flys and humans with the SHITs (I kid you not, an acronym for a genetic condition in flies that caused them to freeze up at normal temperatures), and nerd jokes aplenty about researching “the science”.

Some gags went off far better than they should have, and a few bombed to uncomfortable silence, but it was a surprising show that offered a lot of laughs even if it was light on time with the venerable doctor. Given the choice, I would have enjoyed more time hearing Suzuki speak, but my hat is off to Monkey Toast.

Amy Schumer is hilarious, inappropriate, and an absolutely natural comic. She also was, hands down, my favorite act at JFL42 because she was not only fresh and lively, but also because she was just plain charming.

Featuring the very funny Tom Segura as her opening act, who joked about cowboy hats and his doctor questioning his sexuality, Schumer seemed to capture the audience’s attention from the moment she stepped out because Segura was the perfect opening act, setting her up to joke about sex, dating, and, yes, even more sex.

Pushing propriety throughout her set, Schumer has a knack for taking on dark territory without flinching, and she makes some topics funny, even if you’re not sure if you should really be laughing. At the same time, she also took on a few topics, most notably rape, in a way that suggested she’s trying to open discussions that need to start happening more. 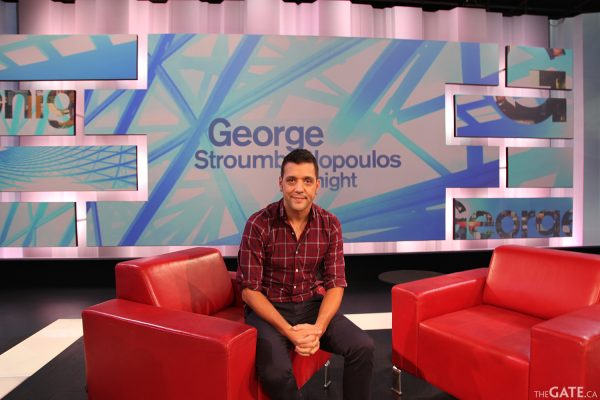 George Stroumboulopoulos has been a notable personality in Toronto since the 90s, thanks to his time on the radio and on MuchMusic, but with his CBC show, there’s no question that he’s now one of Canada’s most memorable media personalities, and that comes down to the fact that he’s not only smart and funny, but also a very talented interviewer.

JFL42 opened up the opportunity for people to sit in on one of his tapings at the CBC building, and despite a few natural slow points as the crew prepared to roll, the process was interesting to see how he puts the show together each week and the talented people involved in making the show both funny and interesting.

Otherwise, the show has a great format, but comedian Ali Hassan keeps the Three Things panel lively, no matter what the topic might be, and the warm-up act helps keep the audience interested before there is really anything going on, and that’s on top of the killer music playing between taped segments.

Most importantly though, Stroumboulopoulos’ guests are all kinds of amazing. The day I was on set, Alan Thicke was the guest, and if you haven’t had the chance to hear him speak, you really need to check him out. Thicke is interesting and off-the-cuff, and he is very honest, even to the point of being self-deprecating.

It seems impossible to describe the hype that surrounds a live Louis CK show. After winning his Emmy Awards, and after all the buzz that preceded him over the last year, he’s a genuine comedy star, but I still didn’t really know what to expect from him.

Comedians K. Trevor Wilson and the very funny Todd Barry opened for CK, and while their sets were funny, the crowd sounded almost reserved compared to how they erupted for CK once he stepped on stage.

By the second half of his set, CK had the crowd laughing at every other line, but it took a while for him to warm up to that point. The comedian is an expert, and his set seemed effortless as he moved from topic to topic while he lambasted himself and the idea of how comedy works, not to mention providing way more information than we probably need to know about his body.

His set was also, of course, filthy, and left lots of questions for any moralists in the audience, but it was exactly what comedy should be for a live audience–fresh, and explicit, and open to just a bit of interpretation.

Easily the best moments for me came near the end of CK’s set, when he talked about the two sides of a number of topics. “Of course” people with peanut allergies need to be helped out, “but maybe…”

Best of all, CK left the audience with a clever reminder about the world we live in. “Of course” slavery is wrong, “but maybe” we wouldn’t have these great cell phones and technology if it wasn’t for what is effectively slavery in Asia. Like all great comedians, that left something for the audience to think about on their way out the door.