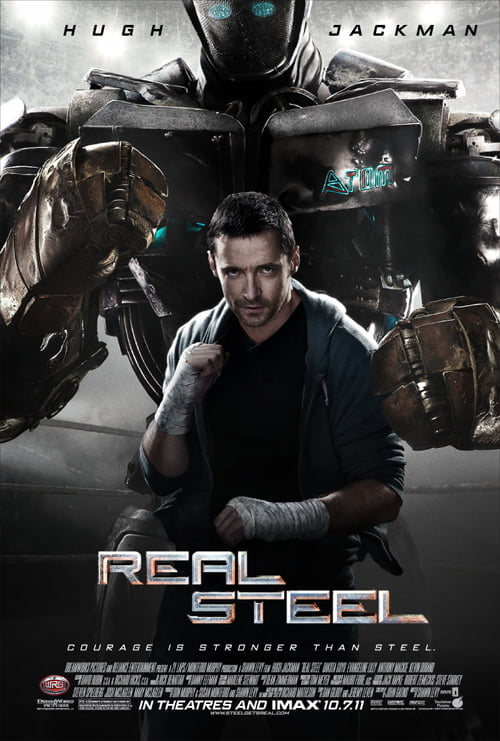 Hugh Jackman, Dakota Goyo and Evangeline Lilly star in director Shawn Levy’s action-drama, Real Steel, and The GATE is giving away double passes in seven Canadian cities to see the film before it opens in theatres on October 7.

The film is based on Richard Matheson’s short story, “Steel,” and tells the story of a father and son connecting for the first time as they try to take their robot fighter to the pro league of next-generation boxing.

Synopsis: A gritty, white-knuckle, action ride set in the near-future where the sport of boxing has gone high-tech, Real Steel stars Hugh Jackman as Charlie Kenton, a washed-up fighter who lost his chance at a title when 2000-pound, 8-foot-tall steel robots took over the ring. Now nothing but a small-time promoter, Charlie earns just enough money piecing together low-end bots from scrap metal to get from one underground boxing venue to the next. When Charlie hits rock bottom, he reluctantly teams up with his estranged son Max (Dakota Goyo) to build and train a championship contender. As the stakes in the brutal, no-holds-barred arena are raised, Charlie and Max, against all odds, get one last shot at a comeback.


The Giveaway: Double passes will be awarded for screenings in Toronto, Ottawa, Calgary, Vancouver, Edmonton, Winnipeg and Halifax on Wednesday, October 5th at 7:00 PM.

The giveaway closes on Monday, October 3, 2011 at 12:00 PM (ET) and winners will be selected from a random draw. Chances of winning depends on total number of entries. Entrants must be over the age of 18 to be eligible. Winners are responsible for transportation to and from advanced screenings. No purchase is necessary to participate.

Please note that Real Steel opens in theatres on Friday, October 7 and is rated PG-13.