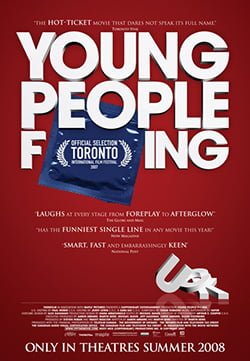 Maple Pictures and The GATE are giving movie fans in Toronto a chance to win one of twenty double passes for a screening of the new comedy/drama Young People Fucking, which hits theatres on June 13.

About the movie:
Each of five stories traces a single sexual encounter between each couple, leading from “Foreplay” through to “Afterglow.” Each couple’s attempt to have sex is met with an endless stream of complications. The Couple, Abby (Kristin Booth) and Andrew (Josh Dean), try to spice up their stale love life, only to discover that things are worse than they thought. Matt (Aaron Abrams) and Kristen (Carly Pope) are The Friends, lifelong buddies, one sick and the other sick of love. Their plan to sleep together goes off the rails when romance rears its ugly head. The Exes, Mia (Sonja Bennett) and Eric (Josh Cooke), hook up again for old time’s sake, while trying to hide the feelings they still have for one another. In The First Date, world-class playboy Ken (Callum Blue) comes clean about his history to his naïve young date Jamie (Diora Baird), learning some of her secrets in the process. The Roommates, Dave (Peter Oldring) and Gord (Ennis Esmer) are normally at each other’s throats, but set aside their differences for a threesome with Gord’s girlfriend Inez (Natalie Lisinska). In each case, the couple (and trio) discovers that sex isn’t always simple.

Young People Fucking was directed by Martin Gero, and written by Gero and actor Aaron Abrams. Screened during the 2007 Toronto International Film Festival, the movie was a fan favorite that sold out in record time.

You must be over the age of 18 to enter this contest. The screening takes place on Thursdy, June 12 at 7:00 PM in downtown Toronto, and just a reminder folks, transportation to and from the screening is not included in this contest.

Find out more about the movie at the official website, www.ypfthemovie.com.