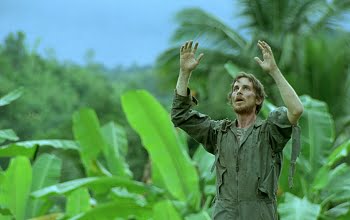 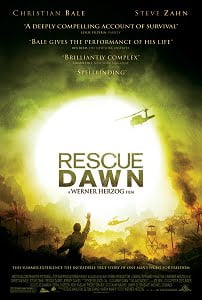 Enter for a chance to win one of ten double passes to see an advanced screening of Rescue Dawn in Toronto. The screening will take place downtown on Thursday, June 28 at 7:00 PM and you must have your own transportation to and from the event. Only entries from Ontario will be considered serious entries for this draw. Contest closes on Monday, June 25 at 9:00 AM and winners will receive their tickets by mail on Wednesday, June 27.

The Story: In the annals of history’s great escapes there is no other story like that of Dieter Dengler, the only American to ever break out of a POW camp in the impenetrable Laotian jungle. After months plotting his getaway from a harrowing prison and a death-defying journey through some of the world’s fiercest wilderness, Dengler appeared at his first press conference looking like a dashing movie star and showing neither sentimentality nor bitterness – simply an indomitable will to survive that allowed him to triumph against impossible odds.

Now, from legendary director Werner Herzog (Grizzly Man, Fitzcarraldo) and starring acclaimed actor Christian Bale (Batman Begins, The Prestige) comes the incredible true story of a man who, from the depths of total darkness, blazed his own willful path to freedom. A blistering action-adventure and a stark epic of survival, Rescue Dawn reveals how Dieter Dengler relied on the most primal qualities of evasion, endurance, tenacity and courage to find his way home.

Recue Dawn opens in Toronto on July 6, and you can find more information at the official website at rescuedawn.mgm.com.