Disney’s Moana sets sail on Blu-ray next Tuesday, March 7, and The GATE is giving away three copies to get fans inspired to sing and and dance along with Moana and Maui.

Starring the incredible new actress Auli‘i Cravalho as Moana, and Dwayne “The Rock” Johnson as Maui, the film is a fun and fresh musical with sing-along hit songs written by Lin-Manuel Miranda. Moana was directed by Ron Clements and John Musker, the duo who were also responsible for The Little Mermaid, Aladdin, and The Princess and the Frog.

Included on the Blu-ray are a number of featurettes: the Inner Workings short film, a Maui mini-movie “Gone Fishing”, a look at the cultures that inspired the film, Alessia Cara’s music video for “How Far I’ll Go” and numerous extras that look at how the film was made.

Synopsis: Walt Disney Animation Studios’ Moana, the sweeping story of a spirited teenager who sets sail on a daring adventure to save her people, starring newcomer Auli‘i Cravalho as the voice of brave and tenacious Moana and Dwayne “The Rock” Johnson (HBO’s Ballers, Central Intelligence) as the larger-than-life demigod Maui, has dazzled both critics and audiences. The film earned a 95% critics’ consensus on Rotten Tomatoes. Now, Moana sets a new course, arriving to homes on Digital HD/3D on February 21, and on Blu-ray 3D, Blu-ray, DVD and On-Demand on March 7.

Giveaway Details: The GATE’s Moana Blu-ray giveaway is open to residents of Canada who are over the age of 18. Contest closes on March 9, 2017 at noon (ET). The chance of winning depends on total number of entries. This prize is valued at $25. 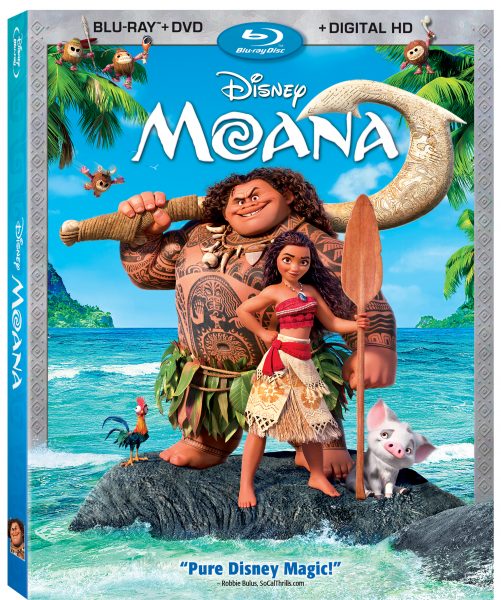