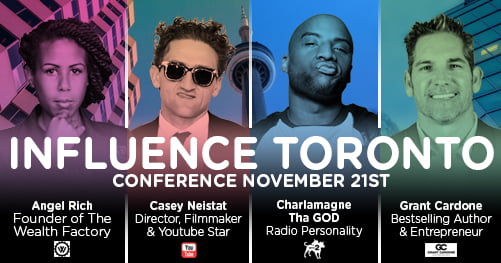 The GATE and InfluenceTO are giving away five pairs of tickets for Canada’s #1 influencer and entrepreneurship conference, InfluenceTO 2017, at the Enercare Center in Toronto on November 21st.

About InfluenceTO: InfluenceTO 2017 will expose attendees to different types of entrepreneurs and influencers from various industries to allow them to gain insight on their recipe for success: from challenges to the steps to make it work. Attendees can expect to get tangible tools and information to fuel their growth through hands-on masterclasses and interactive panels.

Five pairs of general admission tickets will be awarded in a random draw.

Giveaway Details: The GATE’s InfluenceTO ticket giveaway is open to residents of Canada who are over the age of 18. Contest closes on November 17, 2017 at noon (ET). The chance of winning depends on total number of entries. This prize is valued at approximately $198.