Giveaway: ‘Despicable Me 3’ on Blu-ray

The GATE and Universal Pictures Home Entertainment want you to enjoy some time with the Minions, and Gru, this holiday season with a chance to win one of five copies of Despicable Me 3 on Blu-ray.

About Despicable Me 3: After he is fired from the Anti-Villain League for failing to take down Balthazar Bratt, the latest evil mastermind to threaten humanity, Gru finds himself in the midst of a major identity crisis. But when a mysterious stranger shows up to inform Gru that he has a long-lost twin brother — a brother who desperately wishes to follow in his twin’s despicable footsteps — the former super-villain rediscovers just how good it feels to be bad.

Giveaway Details: The GATE’s Despicable Me 3 giveaway is open to residents of Canada who are over the age of 18. Contest closes on December 11, 2017 at noon (ET). The chance of winning depends on total number of entries. This prize is valued at approximately $25. One entry per person. The prize cannot be exchanged for cash or any other form of credit and the prize may not be exactly as shown. The GATE reserves the right to make substitute the prize for another of equal or greater value. 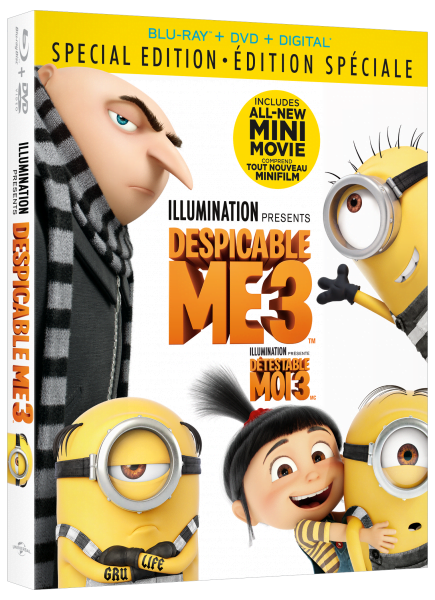 This would be cool!!