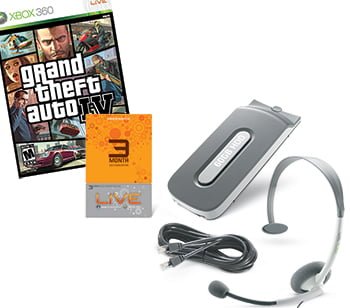 Celebrating the release of Rockstar’s Grand Theft Auto IV downloadable content, The Lost and Damned, The GATE and Xbox Canada are giving away a special prize pack, including an Xbox Live 60 GB Starter Kit.

Expanding on the hit game, The Lost and Damned puts players in the shoes of tough-guy Johnny Klebitz, the second in command of biker gang The Lost. With the release of the gang’s President, the hell-bent Billy Grey, Johnny is forced into a turf war with rival gangs as he decides what’s right for his brothers.

The prize pack includes a copy of Grand Theft Auto IV, an Xbox Live 60 GB Starter Kit with hard drive and three months of Xbox Live Gold service, plus loads of Xbox Live points to download The Lost and Damned or other downloadable content.

One winner will be randomly selected from all entrants. To enter, fill out the form below. You must be a resident of Canada to enter, over the age of 18, and the contest closes on March 18 at 11:59 PM.