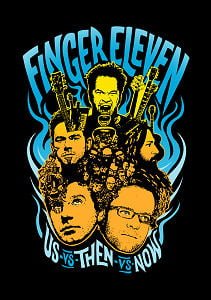 The GATE is giving you a chance to win a very special signed Finger Eleven collection, including the band’s brand new DVD, Us Vs. Then Vs. Now, plus all five of their CDs.

In addition, two runners-up will be chosen to win a copy of the new DVD, which hits store shelves on December 4th.

Us Vs. Then Vs. Now includes over 2.5 hours of never before seen footage spanning their entire career, plus an extra CD of 14 unreleased tracks that includes demos and remakes.