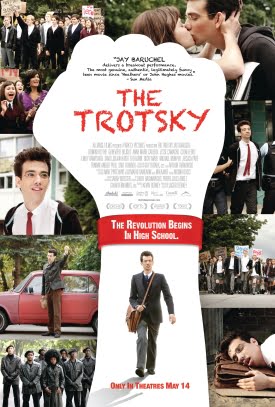 In partnership with Alliance Films, The GATE is giving away double passes to The Trotsky (thetrotskymovie.com), a comedic Canadian film by writer and director Jacob Tierney which stars Jay Baruchel as the highschool reincarnation of Marxist Leon Trotsky.

Synopsis: Leon Bronstein (Jay Baruchel) is not your average Montreal West high school student. For one thing, none of his peers can claim to be the reincarnation of early 20th century Soviet iconoclast and Red Army hero, Leon Trotsky. When his father (Saul Rubinek) sends Leon to public school as punishment for starting a hunger strike at the Bronstein family’s clothing factory, Leon quickly lends new meaning to the term “student union”, determined as he is to live out his pre-ordained destiny to the fullest and change the world.

The giveaway closes tomorrow, Friday, May 7 at 12:00 PM (ET) and winners will be selected from a random draw. You must be over the age of 18 to enter.