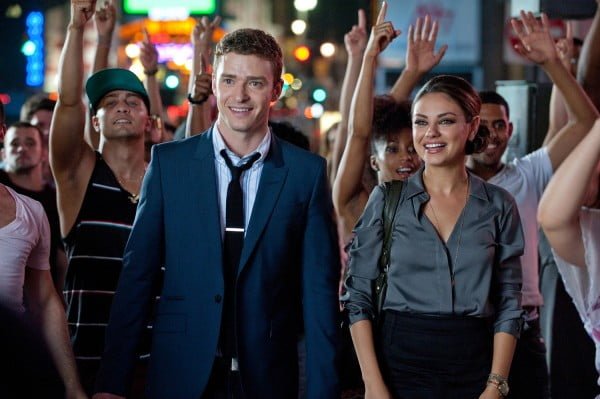 Justin Timberlake and Mila Kunis in Friends With Benefits

If Friends With Benefits sounds familiar to you, don’t be too surprised. Director Will Gluck’s latest romantic comedy fits well into the mold we’ve come to expect from this kind of story, but it also bears more than a little resemblance to a recent film with almost an identical premise. The difference though is that Gluck is no ordinary director, and he worked with a cast that could not have possibly been more perfectly chosen.

Justin Timberlake stars as Dylan, a work-obsessed designer who finds himself single and labeled “emotionally unavailable” by just-now-ex-girlfriend in the great city of Los Angeles while, across the country in New York city, Jamie, played by Mila Kunis, is dumped by her loser boyfriend who calls her “emotionally damaged.” Through a quirk of fate, the two are drawn together some months later when Jamie, working as a headhunter, convinces Dylan to try for a job at GQ magazine in New York. Becoming close friends, the two hang out constantly, but neither of them is all that successful at dating, so they come up with a plan.

As Dylan puts it, what if sex was like playing tennis? He suggests to Jamie that it could be as simple as asking a friend to play, which leads the two friends into uncharted territory that oddly enough works out perfectly for both of them. Being emotionally maladjusted, the two seem to find no problem keeping emotions out of their sexual adventures.

For some time the arrangement works fine, but they each discover themselves being just a little more open and honest with their friend than they ever were with anyone they dated. That honesty leads to a complication when Dylan invites Jamie to Los Angeles to meet his sister and father for the fourth of July weekend, something he’s never done with anyone before, which also leaves his family wondering if there isn’t something more going on.

Mocking the usual romantic comedy stereotypes early on, the funny thing about Friends With Benefits is that, try as it might, it really can’t escape the formulaic vortex of the genre. From the script to Gluck’s direction, huge attempts were made to make this film different–and it really is different in the ways that matter–but when it comes to the ending you could likely have predicted it the moment you walked into the theatre.

Unluke Gluck’s brilliant film Easy A, Friends With Benefits is just a bit more routine, and maybe even a little more uneven in places, but the film is still incredibly enjoyable, hilarious, sweet, and funny as it tells this story about two people falling in love.

Timberlake and Kunis have great chemistry together, and make the story charming, not to mention sexy. Chances are good you’ll see more of both stars here than you ever might have expected, but Gluck doesn’t overdo it. Friends With Benefits has sex appeal without going too far, and the dialogue, while often moderately raunchy, makes the characters seem all the more real.

Friends With Benefits is one of my favorite films of the year, and if it falls just-short of being a When Harry Met Sally for this era, it’s still a fantastic follow-up for a director who is quickly becoming one of my new favorite filmmakers.

This week’s other big release hardly needs an introduction as Marvel sets up their huge Avenger franchise with one of their longest-running heroes: Captain America.

Fantastic Four star Chris Evans stars as the wimpy-to-heroic Steve Rogers, a man with no brawn but tons of spirit who volunteers for an experimental program that can turn him into a super soldier at the height of America’s war days. Spectacularly successful, the experiment turns Steve into the brawny hero he always wanted to be, and has him leading the charge against an organization known as HYDRA, which is led by the terrible Red Skull, played by Hugo Weaving.

Featuring Hayley Atwell as Cap’s love interest, Peggy Carter, and starring Dominic Cooper as Howard Stark, and Tommy Lee Jones as Colonel Chester Phillip, Captain America: The First Avenger is exactly what you should expect from a comic book adaptation, and while it’s not flattening critics, it has received some good reviews.

“A star-spangled superhero from the Norman Rockwell era,” wrote Rafer Guzman for Newsday, “Captain America might seem ill-prepared to do battle at the modern box-office… But never underestimate the power of old-fashioned corn.”

Owen Gleiberman of Entertainment Weekly wrote, “The picture is nothing, really, that you haven’t seen before, but it’s the definition of a square, competent, deliver-the-goods blockbuster.”