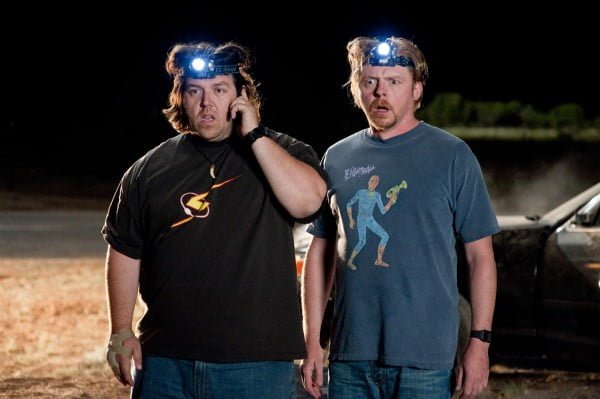 A scene from Paul starring Nick Frost and Simon Pegg

This week’s new releases on Blu-ray and DVD include: Paul, the tongue-in-cheek alien comedy starring Simon Pegg and Nick Frost; the animated Disney film, Mars Needs Moms; and the stoner comedy, Your Highness.

As far as I’m concerned there are only two types of people in the world: those who love Simon Pegg, and those who don’t. If you’re part of the former category, I can’t think of a better film for you this week than the nerdy comedy, Paul.

Ever since I saw Shaun of the Dead all those years ago I’ve been a fan of Pegg, which makes the arrival of Paul, his first major North American film, all the more exciting.

Greg Mottola, who helmed Superbad and Adventureland, directs this zany comedy about two sci-fi geeks, Graeme and Clive–played by Simon Pegg and Nick Frost–on a road trip through America’s heartland of obsessive UFO fanaticism. As it turns out, the two friends meet an actual alien on their trip, voiced by Seth Rogen, who has been stuck at a top-secret military base for the last 60 years.

Hitching a ride with the two Earthlings, and a woman the group mistakenly kidnaps, Graeme and Clive come up with a crazy scheme to get their new alien friend back to his mother ship and on his way home.

Written by Pegg and Frost, who have never written a film together before, Paul is a madcap comedy with a heartfelt side that features loads of nerdy references to all things alien, from Star Wars to Close Encounters of the Third Kind.

Paul is a funny, engaging comedy not only because Rogen offers some comic charm as the voice of Paul, but most importantly because the chemistry between Pegg and Frost is as bubbly as we’ve seen before. On the other hand, Paul does suffer from being fairly obvious at times, even if Jason Bateman is spectacular as the kick-ass secret agent.

The only other problem with Paul might be that, for all the great talent assembled here, it lacks the strong direction of Pegg’s work with director Edgar Wright. Mottola’s previous films were good, but the pieces just don’t fit together as well in Paul, even if the film is frequently hilarious.

Features and extras on the DVD include some sub-par bloopers, a very funny feature showing the many silly faces of Simon Pegg, a feature commentary by Mottola, Pegg, Frost, and Hader, not to mention a making-of featurette.

Featuring some impressive, beautiful scenery, design and effects, Mars Needs Moms has its moments that will inspire kids and adults. Topping that list are some of the subterranean landscapes, which are actually stunning, and the overall character design. The ending is also fairly touching, and might be a lesson a lot of moms would like their kids to learn.

On the other hand, the writing is okay at best, and often not very funny, and the human faces are absolutely appalling. These are really terrible, terrible renderings of humanity, and the mixture of human and Martian faces on screen together actually looked disconcerting, like you couldn’t imagine why an animated cartoon was standing next to a somewhat human looking face.

Despite the faces, the slow pace throughout the early scenes, and a script that could have been a lot better, I’m still recommending Mars Needs Moms, especially for families who want a good weekend movie to entertain the kids. It will definitely keep the young ones happy, but I would caution parents that some elements may be a bit scary for younger children.

Blu-ray extras are decent, but not outstanding, including an audio commentary, a few deleted scenes, and an interesting feature on the motion capture process, Life on Mars: The Full Motion-Capture Experience.

As the adage goes, if a trailer makes a movie look dumb, and the movies sounds dumb, you’ve probably got a dumb movie, which might explain why Your Highness is such a terrible film.

Forgettable, silly, and generally not at all funny, Your Highness is definitely a film you can skip.

Also arriving on DVD and Blu-ray this week:

Super, starring Rainn Wilson as an ineffectual man who decides to become a superhero vigilante, something he’s equally not all that great at.

Plus Disney’s The Fox And The Hound celebrates its 30th anniversary with a special edition that is packed with extras, plus the sequel.