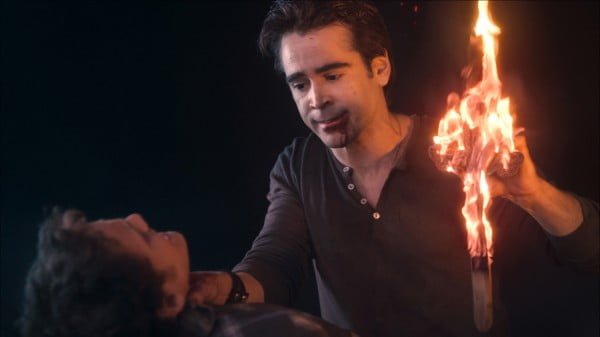 Anton Yelchin and Colin Farrell in a scene from Fright Night

New arrivals in a theatre near you this weekend: Colin Farrell stars as a blood-sucking monster in the remake, Fright Night; the great warrior of the eighties returns in Conan The Barbarian; plus Anne Hathaway and Jim Sturgess try to make their relationship work over the years in the drama, One Day.

Anton Yelchin stars in the remake of the classic 1985 horror film, Fright Night, as high school student Charlie Brewster, a former geek who has found himself a beautiful girlfriend that helped make him some popular friends. His former best friend, Ed, played by Christopher Mintz-Plasse, needs Charlie’s help though because he suspects that Charlie’s new next-door neighbour, Jerry, played by the great Colin Farrell, is actually a vampire that’s preying on the little community.

Sneaking around the suburb of Las Vegas, the two hunt for answers about the whereabouts of their friend, but Charlie thinks Ed is just reliving their childhood adventures, dreaming up a fantasy that can’t possibly be real.

Leaving his friend to fend for himself, Charlie goes back home, but as the days pass he begins to realize Ed may not be all that crazy after all as signs point to Jerry’s true, blood-thirsty nature. Like a cat toying with a mouse, Jerry slowly shows himself to be a true predator who finally snaps, hunting down Charlie, his mother, played by Toni Collette, and most importantly, his girlfriend, played by Imogen Poots.

Using the original film’s basic premise as the plot, director Craig Gillespie’s Fright Night remake is a stylish, funny, and downright creepy adventure that has all the right elements. The cast is excellent, particularly Farrell, Yelchin, Poots, and the amazing David Tennant as “vampire hunter” Peter Vincent, the script by Marti Noxon is well-paced and riveting, and Gillespie’s direction moves the entire story along at a brisk pace.

Yelchin is a great lead for this coming-of-age vampire-hunter story, infusing the dialogue with a level of believability, and humour. Against Farrell’s feral Jerry, that works very well, and Farrell pours himself into the role of the hunter, giving the character an intensely creepy vibe that makes him entirely believable as a 400-year-old monster.

Rare though it may be, the 3D is also well above average, adding some interesting depth to a number of scenes, including some of the bloodier special effects sequences.

What I find most remarkable is that Gillespie, who previously directed Lars and the Real Girl, can switch so easily between films with such very different moods and feelings. Lars and the Real Girl is one of my all-time favorite films, and despite my expectations, his Fright Night remake is one of my new favorite vampire movies–one of the best vampire movies in some time, in fact.

Though summer is still here for a while, I hope this film sticks around in theatres until Halloween so I can catch it one more time on the big screen when there’s a bit more of a ghoulish mood in the air.

Yet another remake this week, although with far less going for it, is director Marcus Nispel’s Conan The Barbarian, about a Cimmerian warrior named Conan, played by Game of Throne’s Jason Momoa, who must take on monsters and terrible odds to save the nations of Hyboria from great, supernatural evil.

The film co-stars Mickey Rourke, Stephen Lang, and Rose McGowan, in what can only be called a sword and sorcery adventure that will see heads roll.

The original Conan film was not exactly one of the best films ever made, but it was still amusing and earned a spot among genre films of the era. This remake, however, has earned very little but bad reviews so far.

“Dull and uninvolving,” wrote Gary Dowell for the Dallas Morning News, “Conan the Barbarian occasionally verges on escaping its rut, but never makes good on the promise. It’s busy without having energy, a loud, lackluster mess.”

Scott Tobias of NPR commented, “There are swords and sorcery, pirates and monsters, taxed bodices and taxing mythology. In other words, there’s the bare minimum necessary to summon this dismal movie into existence.”

Lastly, there’s the romantic drama, One Day, starring Anne Hathaway and Jim Sturgess as best friends, Emma and Dexter, who met on July 15, 1988. For the next two decades, the film revisits the two friends as they come together for their anniversary, sharing their lives, heartache, and love, not to mention missed opportunities that they feel passed them by.

Directed by Lone Scherfig, who also helmed An Education, the film looks like it could be quite special, and even a little funny, but it has failed to inspire many critics.

A.O. Scott wrote for the New York Times, “One Day turns an episodic story into an anthology of feelings and associations, many familiar, a few surprising, some embarrassing and one or two worth holding onto.”

While Michael Phillips of the Chicago Tribune wrote, “When a movie inflates the importance of a love story that is predominantly comic in tone, even with a fair share of grief and loss built into the plot, that love story takes on more than it can handle.”