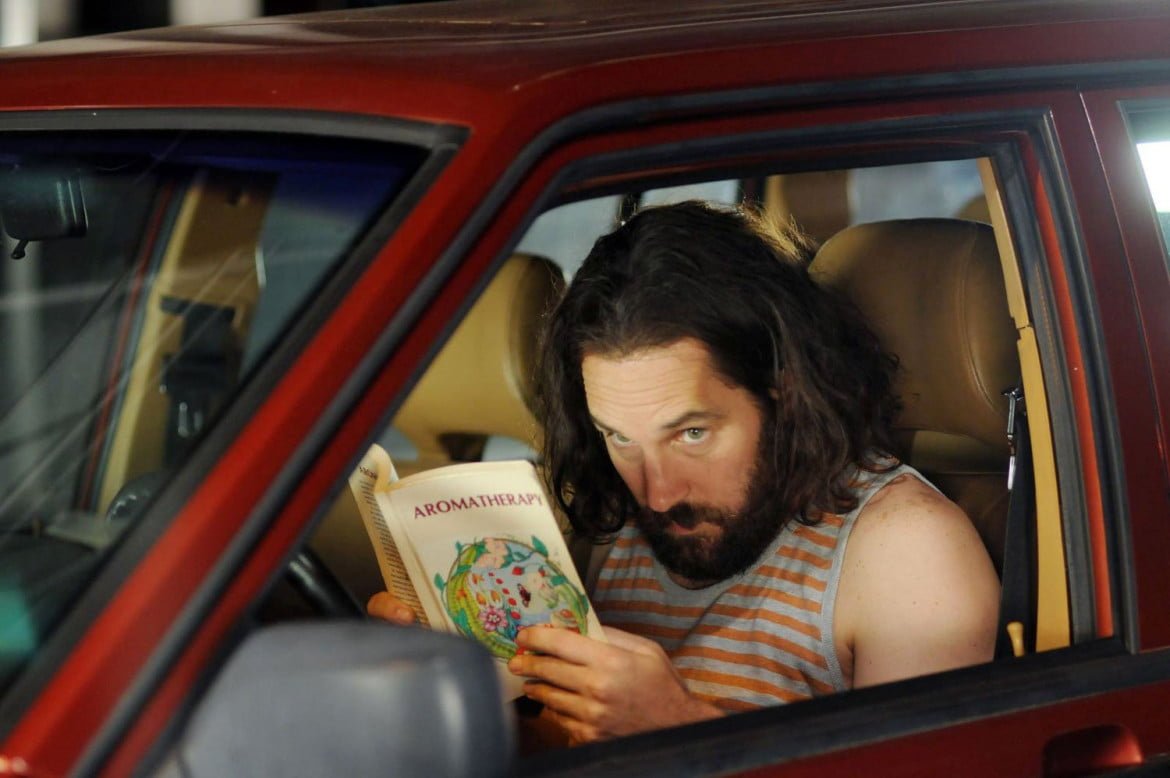 Paul Rudd in the comedy Our Idiot Brother

What do you do with a happy-go-lucky but somewhat useless sibling when their life takes yet another nosedive that leaves them homeless and without anywhere to go? For Liz, Miranda and Natalie–played by Emily Mortimer, Elizabeth Banks and Zooey Deschanel–they share their homes with him, taking turns at caring for their brother Ned, played by Paul Rudd, who really seems to have no cares in the world, but also can’t seem to take care of himself.

Ned brings with him trouble, of course, as his belief in pure honesty leads to problems for all three sisters, creating conflicts and making the women wonder why Ned can’t just be like everyone else.

As they get to know their brother even better though, it’s possible Ned may have some lessons to teach his sisters, but it could be a tough road to wisdom and happiness.

Earning this weekend’s best reviews–just barely–Our Idiot Brother may not be the funniest film of the year, but as usual, much has been said of Rudd, even if the rest of the film is a little overdone.

“The hippie jokes are as obvious as Ned’s shaggy beard,” wrote Peter Paras for E! Online, “but that’s OK since this story about a painfully nice guy mostly works.”

Katey Rich of CinemaBlend.com was less positive, however, writing: “It’s a shame to see Rudd given a role that lets him hit it out of the park in a movie that never comes close to matching him.”

From Transporter 3 director Olivier Megaton, and writer/producer Luc Besson comes the latest femme fatale story about the young Cataleya, played by Zoe Saldana, who turned to the life of an assassin after she saw her parents killed when she was a child.

Working with her uncle, she only has one goal, and that’s to bring her parents’ killer, who happens to be a mobster, to justice; whatever it takes.

Following Besson’s other films which focused on deadly-smart killer ladies, most notably La Femme Nikita (although the theme is a popular one for Besson, whether you’re talking about The Fifth Element of Angel A), Colombiana puts Saldana into yet another role that asks little of her acting skills, and much more on her sex appeal. If that’s enough for you, this film might be passable, and the reviews are heavily mixed for and against how the film unspools.

Jim Vejvoda wrote for IGN Movies, “Despite its borderline campiness and arrested adolescent mentality, Colombiana succeeds in delivering the goods as a fun albeit formulaic action flick that’s most notable for Zoe Saldana’s stone-cold yet still sexy performance.”

While Andrew O’Hehir of Salon.com wrote, even more enthusiastically, “A movie so addicted to the crack pipe of delirious cinematic badness that it has real potential as a camp classic.”

Guy Pearce and Katie Holmes star as Alex and Kim, a new couple working to restore a mansion that seems to have a very dark history. As Alex’s daughter Sally, played by Katie Holmes, explores the old estate, she is drawn further into the building by voices that call to her from somewhere beyond. As she follows the voices, she helps set free a dark force that threatens to consume the home and everyone in it, but as is so often for unfortunate children in horror movies, no one believes her warnings.

Directed by comic book artist-turned filmmaker Troy Nixey, this adaptation of the original made-for-TV movie has mixed reviews, and as Rene Rodriguez wrote for the Miami Herald, “Despite all the care that has been put into it, the film doesn’t transcend its dime-store horror roots.”

Peter Howell similarly dismissed the film, writing for the Toronto Star, “This artless film even approaches child abuse, in the way it crassly reconfigures the protagonist from the besieged adult woman of the original into a neglected and terrified tot.”