‘Spider-Man 3’ fun but lost in its own web 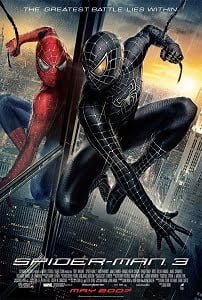 Sam Raimi has become quite the icon, if nothing else for claiming lordship over the cult masses with his Evil Dead films. But it wasn’t until the Spider-Man franchise that Raimi officially made it to Hollywood’s “it” list, gaining credibility by giving the Spider’s story heart, while making Peter Parker a living, breathing, hero… and of course still raking in an insane amounts of cash.

With Spider-Man 2, Raimi seemed at the peak of his skills, but looking at Spider-Man 3, it’s a little harder to be as positive about the director’s work. The elements are all there, but Raimi has gone so big, the film is a mess of plot points, characters, battle sequences, and ripped-off comic book stories. And it’s not even that I mind that Raimi claimed whole segments from the Spider-Man comic books, but it’s the way he used those elements in the film. It’s almost like he just dropped the scenes into the film without really making them flow with the rest of the story.

Plus, this is easily Raimi’s goofiest film. Ever. 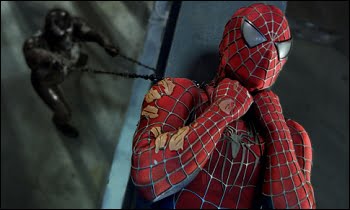 In Spider-Man 3 Tobey Maguire returns as Peter Parker, the geekiest of nerds with an alter-ego bent on city-saving and web-slinging. After all of his adventures against Doc Ock and the Green Goblin, our friendly, neighborhood, web-head is faced with three villains this time around, and all of them are bent on destroying him at once: his friend Harry Osborn (James Franco), dressed to kill as the new Goblin; Flint Marko (Thomas Haden Church), who has become the unstoppable Sandman; and fellow photojournalist Eddie Brock (Topher Grace), who really has it out for old Peter.

Add to all of that one more thing; Peter has discovered a symbiote who happens to get stuck to our favorite hero, giving him new powers, and a shiny, new, black suit. Oh yeah, and an attitude.

With all those elements battling it out there’s no sense that this story is the gigantic tale that could have been the best story yet. There’s not even the snappy opening we got in the last film. And we didn’t need to see Sandman and Brock and Osborn clawing to get at old Spidey. Raimi and his writing team took the hardest course that they could, crammed too many details in, and what we get is a mess of protruding arms and legs sticking out of Spider-Man’s web.

It’s also hard to ignore the cheese factor and the goofy scenes where Parker goes “macho”, dancing like a fool, and making the girl next door bake cookies for him. I liked the comedy shtick in Spider-Man 2, but only because it was comic relief, while the shtick here is just thick and overwrought. 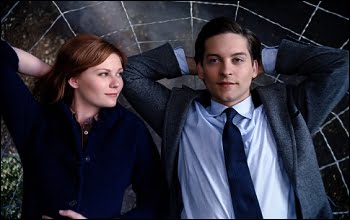 For their parts, the actors are all up to the challenge of the script, although often it’s the co-stars and side-characters that are the most memorable (look no further than J.K. Simmons as J. Jonah Jameson, Bruce Campbell as the MaÃ®tre dâ€™, or even Elya Baskin as Mr. Ditkovitch for proof of that). Maguire and Kirsten Dunst really just coast along from the last film, neither ruining or elevating the film. Franco is however a breath of fresh air in this film, granted that’s at least partly due to the script, but he’s also improved since Spider-Man 2.

Topher Grace holds his own on screen, as does the charming Bryce Dallas Howard as Gwen Stacy, but it’s ultimately Thomas Haden Church who really shows this crew how the old acting thing is done.

On the special effects front, Spider-Man 3 has some spectacular scenes, but considering how long the film is, it’s actually a bit underwhelming. Flint Marko’s transformation scene stands out as one of the best scenes in the film, not only because it’s stunning to watch, but also because it’s surprisingly emotional. On the other hand, the most eye-popping scenes are saved for the end when we really see the Venom all the fan-boys have been waiting for, who is brought to life almost perfectly.

Fans will ultimately love the movie for all of the elements that are crammed in, while probably hating it for being such a jumble. Nothing could stop this steam-roller of a film from claiming the biggest opening box office of the franchise, but I expect the length of the film, coupled with the poor story, will damage the long-term dollars, and maybe even the franchise as a whole.

For my part, I’ll eventually see the film again, but I’m not in a rush and I’m actually more eager about the possibility of one more sequel that will hopefully rise from this project’s ashes. 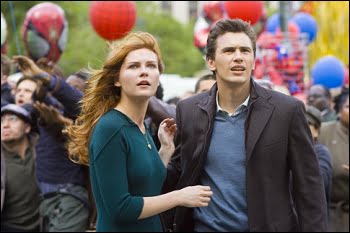