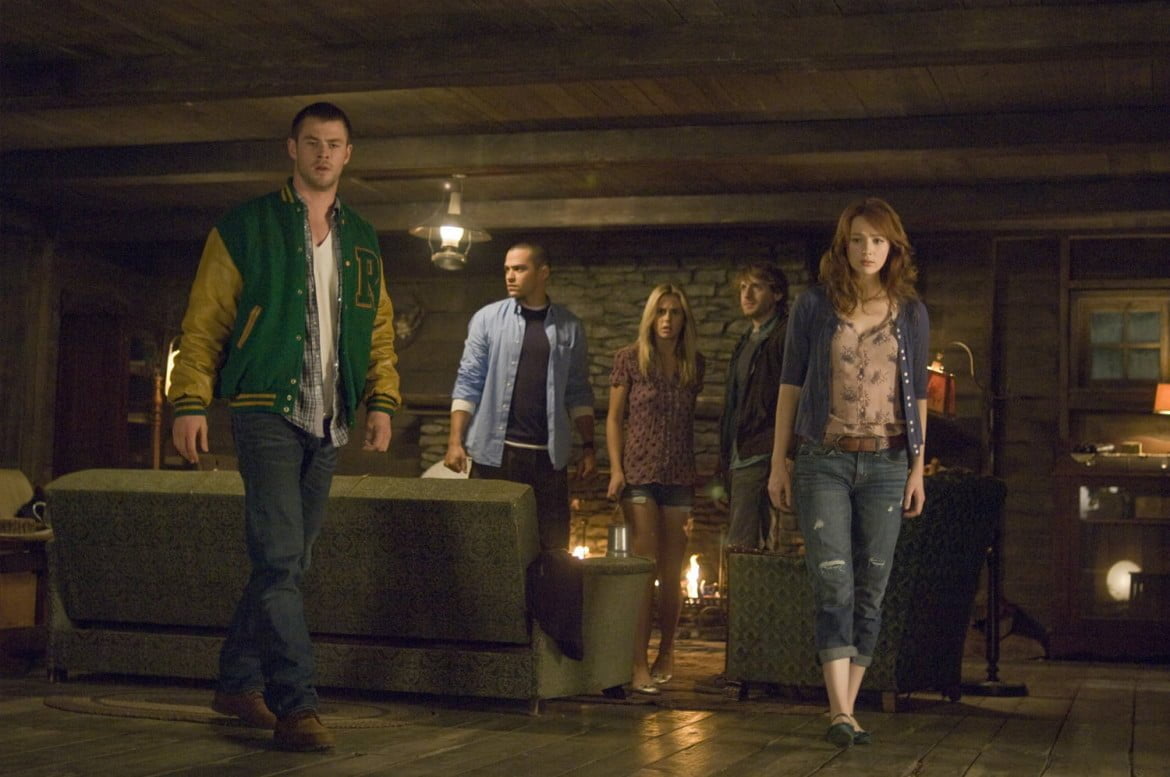 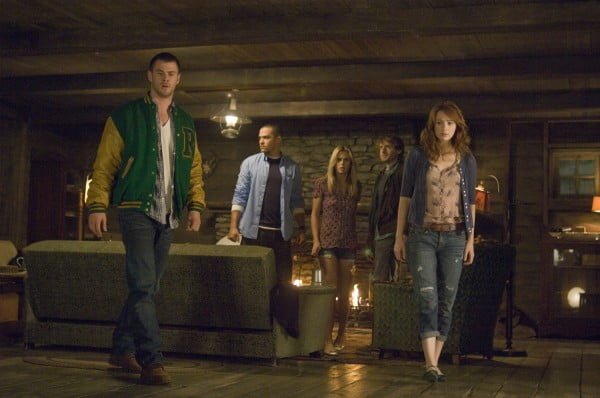 A scene from Cabin in the Woods

After watching so many slasher movies, monster films, and gory extravaganzas, it’s easy to forget there is such a thing as horror with a new perspective, but The Cabin in the Woods laughs its way through a bloody story that is filled with surprises that you likely won’t see coming until they’ve grabbed you by the throat.

Toying with the conventions we’ve become used to–not to mention the gimmicks, the stereotypes, and the plot points–Cabin in the Woods is a deliriously funny film, peppered with tongue-in-cheek asides, that still manages to stack up a decent body count.

From the start, director Drew Goddard makes it clear that this is not the horror film you may have expected. In the opening scene we meet Richard Jenkins playing a scientist named Steve, and Bradley Whitford as his partner, Richard, as the duo prepares for their very unique line of work. That work turns out to be guiding five 20-somethings into a specially outfitted cabin where unknown horror awaits.

Referencing classic horror films at every turn (like The Evil Dead, a few times), and making you wonder just what is going to happen at this cabin, we meet the five people who will be bait in this adventure: Dana (Kristen Connolly), Curt (Chris Hemsworth), Jules (Anna Hutchison), Marty (Fran Kranz) and Holden (Jesse Williams). Heading out in their RV, the five meet the pre-requisite evil red neck who threatens them, and warns them about the horrors they are about to face.

As the group settles in after their long ride, they discover that there is something very strange about this particular cabin, just like that red neck warned. For one thing, there’s a one-sided mirror between two of the rooms that lets one person spy on their neighbour. The even bigger surprise though, once it’s opened from the control room where Steve and Richard are working, is the hidden cellar that is filled with strange artefacts, mementos, and objects, and the horror that one of those objects will inevitably unleash on the group of friends. 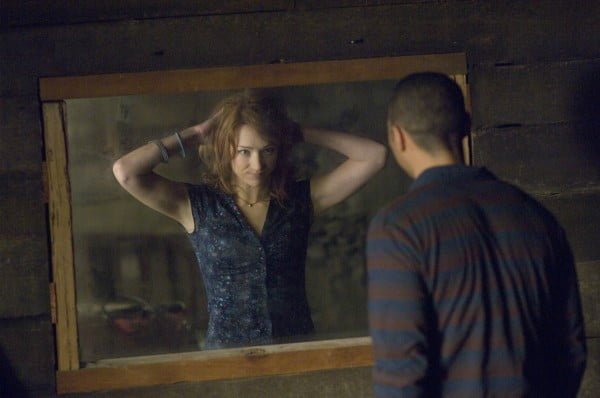 From this point on, Cabin in the Woods follows a fairly predictable storyline–for a while at least–with the friends fighting to stay alive as the control room places bets on what will happen next. The film stays on the edge because it’s hilariously well scripted, and because it leads you to expect certain things, at least for a while, but then it deftly pulls the carpet out from underneath the audience, the victims, and their puppeteers.

Co-written by director Drew Goddard, who also wrote Cloverfield and a number of episodes of Lost, with writing credit also going to producer Joss Whedon, Cabin in the Woods meanders around, veers in a few directions you will likely not expect, and the script sometimes staggers like a drunken sailor. That unfortunate meandering doesn’t diminish the film in the least though, mainly because it’s so much fun, but also because it expertly tweaks every convention in the horror handbook.

The plot itself–even as it references numerous classic horror films from the last few decades–could be seen as a statement on how most horror films are created, which makes the whole film’s message even more amusing.

Riddled with scares, and a few big jolts, the film is not horrifying by any means; it’s far more likely to make you laugh and wonder what could possibly happen next. That, in fact, might be the only major failing of the film, but it was easy to look beyond that fault since Cabin in the Woods has so much going for it otherwise.

Featuring funny, but fairly run-of-the-mill performances from the cast, the film is ultimately memorable because the cast is likable, and because everything else just fits together nicely with the script–from the special effects to a few of the key death scenes. I also appreciated the quick but amusing cameo by Sigourney Weaver, who walks in for a part that would have otherwise been fairly forgettable.

While I won’t give the film praise for reinventing the genre, I suspect that neither Goddard nor Whedon aspired to such unlikely ambitions. What they created is just a damn fun horror film that will make you want to watch it again, and in my books, that’s an impressive achievement in its own rights. 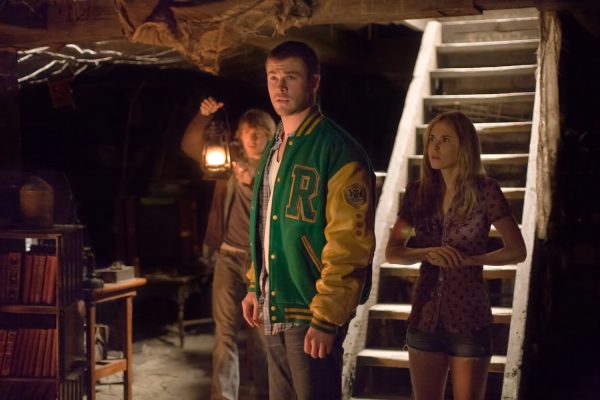