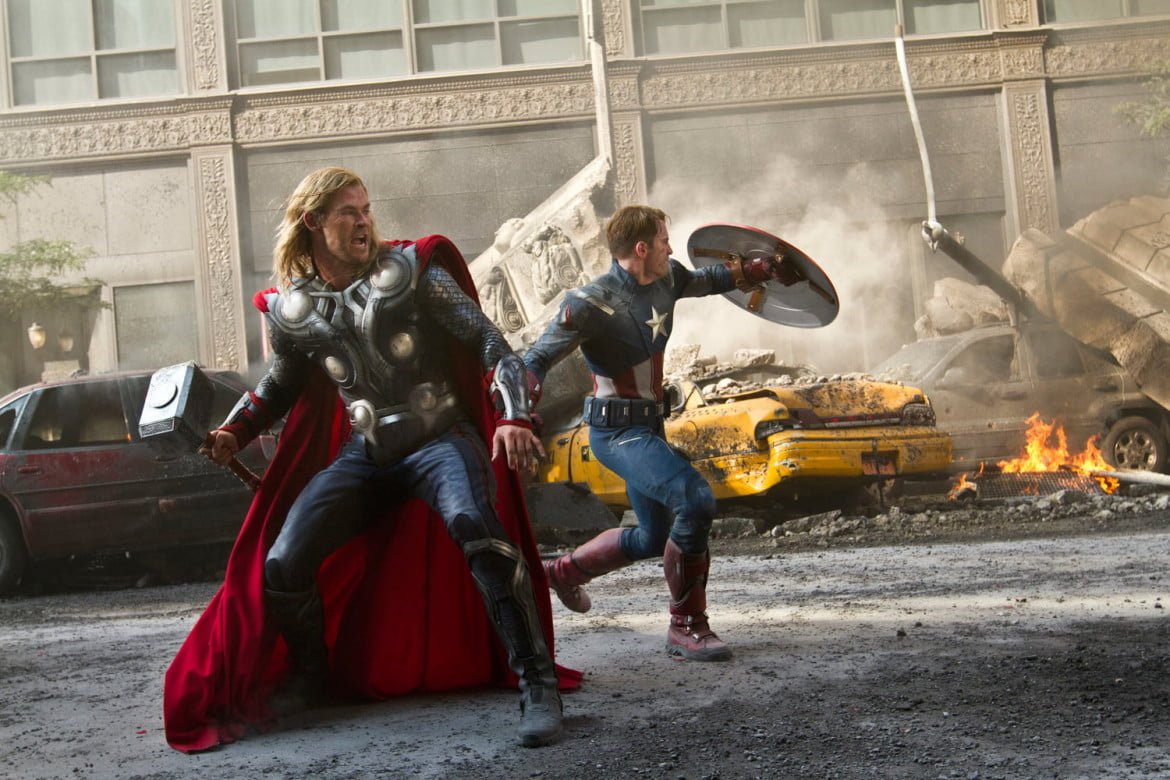 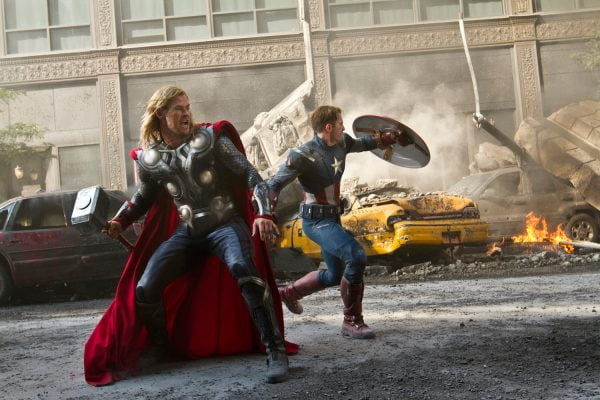 Chris Hemsworth as Thor and Chris Evans as Captain America

In the hands of your average director, The Avengers could have been ridiculous. There are long stretches of conversation where superheroes just talk to each other in small spaces, loads of complicated special effects, and the film is a whopping 2 hours and 22 minutes. On top of that, The Avengers is charged with bringing together three heroes from their respective blockbusters, and giving them some sort of likable chemistry together with new characters we don’t know all that much about.

As helmed by Joss Whedon though, The Avengers is a superhero-sized adventure, among the top ten comic book movies of all time, and proof that Whedon needs to be handed a lot more projects like this one.

Written by Whedon and X2 writer Zak Penn, the movie starts with Loki, played by Tom Hiddleston, breaking into a top secret S.H.I.E.L.D. base where he steals the Tesseract, an all-powerful energy source that the demi god plans to use to enslave the planet. Maniacal laugh.

Taking over the minds of Dr. Erik Selvig (Stellan Skarsgard), and agent Clint Barton (Jeremy Renner), better known as Hawkeye, Loki goes into hiding to plot his next move as Nick Fury (Samuel L. Jackson) brings all his cards to the table, calling in his all-star team to figure out what they can do to stop Loki from succeeding. That is, if he can get them to stay in the same room together without a brawl breaking out.

As agent Natasha Romanoff (Scarlett Johannson), Black Widow, is sent to bring in Bruce Banner, better known as the Hulk, and played this time around by Mark Ruffalo, Agent Coulson (Clark Gregg) is sent to get Tony Stark’s (Robert Downey Jr.) help before they all meet up at S.H.I.E.L.D.’s gigantic air ship with Captain America (Chris Evans). Along the way they manage to pick up Loki’s brother Thor (Chris Hemsworth), not to mention Agent Maria Hill (Cobie Smulders), and Loki himself, but not before tempers are stretched to the limit.

In fact, some of the best action sequences in the film, ahead of the finale, is when the good guys try to beat each other to a pulp all over the place. In the air ship, a forest, or whenever someone’s temper flares up because their tights are riding up.

Although Fury may hope to make a team out of them, the would-be Avengers have a hard time finding common ground, and between their shared fear of Bruce losing control and destroying the ship, and Tony trying to dig into S.H.I.E.L.D.’s closet full of skeletons, it looks like they may never agree on anything. The only thing that could save them is Fury’s vision, Coulson’s courage, and the fact that they’re all about the only hope Earth has from Loki’s evil goals–whatever they may be.

It’s all big and very dramatic at times–brother against brother, god against giant, and all of them against Loki–but it works because Whedon believes in the actors and the material, and because Whedon expertly weaves all these characters into one story while still keeping the jokes rolling.

Although I was not a fan of the Black Widow, and I’m not sure I see how she fits into this collection of super-super-powered heroes, Whedon and Penn guide the characters together naturally, forming a bond between them that not only works for this film, but sets up the possibility of a long-term pact for whatever trouble may come to Earth next.

What makes The Avengers exceptional though is that the characters feel fully realized even though they have to share the screen time with a big group of stars, and Whedon has captured performances from all of them that makes his material stand out. 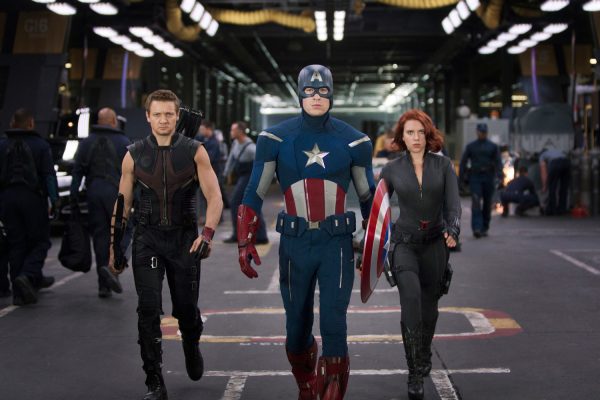 For the most part, that means we get killer zingers from Tony Stark, manipulative trickery from Black Widow, and an interesting dark side to Captain America, but the real eye-opener is Ruffalo’s performance as a never better Bruce Banner. Ruffalo plays Banner as a sombre, thoughtful, and angst-ridden man, and his motion-capture performance as the Hulk feels like a true unleashing of the killer alter ego, but again, with the sense of humour cranked.

I was also impressed by newcomer Cobie Smulders, who you likely know as Robin from TV’s How I Met Your Mother. Although Maria Hill’s role is not a huge part of the film, she deftly steps in as Fury’s second-in-command and Smulders shines, proving the character’s mettle next to big characters, and major stars.

Whedon’s exploration of these characters, and the fact that he gives them room to breath, is why I enjoyed the film so much, and I was equally impressed by the odds he tables against them. We’ve seen all of these heroes nearly falter in previous films, including different versions of the Hulk, but Whedon hammers home the idea that any of these heroes could fail, or die, and he invests their stories with a level of genuine pathos. As a fan of all of Marvel’s recent films, I had to admit that two scenes in particular left me feeling a little choked up, and while I hoped Whedon would succeed with the film, I was impressed by how much he was able to achieve.

Where The Avengers falters somewhat is in the simple story, which is hardly new or inventive, and the fact that it feels a bit like an after thought next to the massing of the troops. Hiddleston is very believable as Loki, but his whole scheme feels a little pre-school to me–like Stewie from Family Guy might have a better shot of coming up with something more diabolical.

These complaints are hardly important though, especially to Marvel fans who have been waiting for this blockbuster gathering for years. Essentially, if you enjoyed any of the previous films that led to the teaming of The Avengers, whether it was Iron Man, Captain America, or Thor, you’re going to want to see The Avengers a few times before it leaves theatres. It’s a fan boy’s dream, and an impressive start to the summer blockbuster season.

All that’s left to say is that, for once in a long time, I was actually really impressed with The Avengers 3-D, which has to be one of the best technical achievements in a few years, certainly well beyond your average 3-D film. Some of the 3-D does add to the story, in small ways, but the important part for moviegoers is basically just that the 3-D is actually worth the extra cost of admission. In other words, if you get a chance to see this in 3-D, you won’t be disappointed.