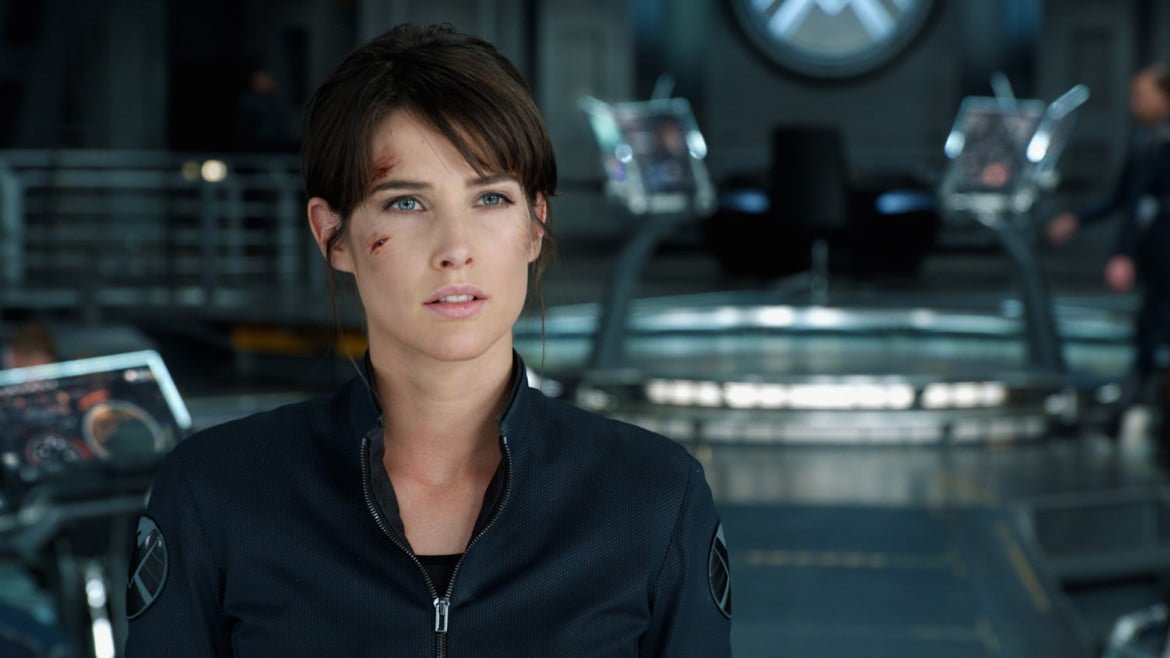 Canadian actress Cobie Smulders has an enviable part on the hit comedy How I Met Your Mother, as the caustic but oh-so-sweet Robin Scherbatsky, but now, thanks to director Joss Whedon, moviegoers are about to see a much more serious side of Smilders as she takes on the part of S.H.I.E.L.D. agent Maria Hill in Marvel’s The Avengers.

The former Vancouver native, who has also worked as a model, earned the intimidating job of playing a new arrival in Whedon’s summer blockbuster, which came with a lot of intimidating factors–not the least of which was working opposite of some serious star power as one of Nick Fury’s leading agents.

During her visit to Toronto this week, ahead of her appearance at a special screening of The Avengers with co-star Mark Ruffalo, Smulders sat down with media to chat about the experience of making a film that is charged with bringing Marvel’s biggest heroes together for one epic battle.

Journalist: What’s it like joining such a huge cast, as one of the new additions, as this group that has never come together, but has always been around?

Cobie Smulders: “Yes, it was extremely intimidating, and like you said, it’s getting this team together and to come in and feel intimidated, but also to be one of the more commanding presences in it was challenging, but I just tried [laughs] to not fall apart in front of Robert Downey Jr., and Sam [Samuel L.] Jackson, and Scarlet [Johansson], and Chris [Evans], and Chris [Hemsworth], and Mark [Ruffalo]…”

Journalist: But you get to boss them around…

Cobie Smulders: “I have to boss them around a little bit, and I think Maria Hill doesn’t really agree with what’s going on, so she’s kind of the naysayer in the group. It was fun, but you know what? Joss Whedon–and I will probably say his name about fifty times, because I love the man–he made me feel so comfortable. And it’s also just the fact that Joss chose me, [that] gave me confidence–do you know what I mean? Because he knows what he’s doing; he’s a fan boy, you know? And I don’t think he would have chosen me to play Maria Hill if he didn’t believe in himself, so I took a lot of solace in that.”

Journalist: Do you have any idea where your character is going to go? Without giving away too much?

Cobie Smulders: “Yeah, I know what you’re saying. I don’t think that I will ever replace anyone, but it’s hard because when you go back to the comic series, you know, Maria Hill takes over S.H.I.E.L.D. at one point, she goes off with Tony Stark as a spy, and in another one she’s a life model decoy, she’s a Skrull, you know? There’s a lot of different ways to go.”

“I really, honestly don’t know much. I didn’t even read the script when I got this part. I got it as soon as I signed the contract and they’re like, ‘And here’s your part. This is who you are and what you’re doing in this film.'”

Cobie Smulders: “No, not at all… I was abandoned.”

“You know it’s funny, we were in London and I was paired with Clark Gregg, and somebody asked us that question and he was like, ‘Oh, yeah. I called up [executive producer] Jeremy [Latcham] and he sent over like this massive book on my character and the history of S.H.I.E.L.D. and Marvel,’ and I was like, ‘Where’s my book?’ because I’m literally scouring the internet, I’m contacting comic book vendors online to see if they have any of the series that have Maria Hill involved. Give me all the ones that have her, I want to see images. So, I really just did all the research myself, and then I did a lot of the training myself as well.”

“But that’s not [entirely] fair, I had a day in Alberkerke, before we started shooting, with the stunt coordinator, but like the day after I got my job I was in the gym boxing and I hired a trainer out of L.A. who trains S.W.A.T. teams and he helped familiarize me with weapons and how they work, and how to load them, and how to shoot them, and how to aim, and how to stalk, and how to roll, and how to do all these things, so I was able to be like, ‘You want me to do that? Yeah, I can do that. Can I do that? Please? I want to do that. No, she [stunt woman] can sit down–she can get a coffee, I’ll do that.’ You know?”

“But, they were very helpful on set with things, but they have much bigger fish to fry than me in this film.”

Journalist: You worked a lot with Samuel L. Jackson. What were your expectations of working with him, because he’s a bit of a persona?

Cobie Smulders: “I thought he was going to be really closed off and unconversational, and just kind of come in and do his thing, but he was so nice, and the thing about him, that I went in realizing, but he’s been in every film ever made. Like, he’s something like the highest grossing actor of all time, and now, I don’t know, he just adds to it. When I think of Sam I think of Pulp Fiction.”

“There was this moment, actually, when we were on the Helicarrier and we were shooting a scene–we were just messing around–and we were standing in front of this huge window. And, I should mention, the Helicarrier was a huge, giant set–it was the size of a sound stage–and so you entered from three different stair ways, and once you were in it, you were on this huge set with hundreds of extras, and at times, the camera, you didn’t even notice where it was.”

“So we were on the front part, standing by the window, and we were joking around, like what would happen if we fell off? Oh, well, Hawkeye would shoot his arrow and, whatever, we were just messing around, and he was like, ‘Or, I could bring out my lightsaber,’ and I was like ‘Yeah, sure, Sam. Weird non-sequitur.’ Then I was like, ‘Oh, wait. You’re a fucking Jedi. Oh, shit. Oh, shit.’ I think I saw the first one of the new Star Wars films, so I forgot that he was a Jedi. I just took a step back. His career is astounding.”

Cobie Smulders: “He is, and he looks great.”

W. Andrew Powell: In terms of your career, you’ve done the amazing comedy work–is this the start of a move into action movies? Or what would you like to do now?

Cobie Smulders: “You know, I was open to action films. They make me feel really cool, and you get to do things, not only physically, but it’s just a whole other medium… you’re sort of working with technology when you’re working in an action film, and that was really cool to do.”

“I was just excited to do something that was just such a jump in a different direction from How I Met Your Mother. It’s always so funny whenever we have a hiatus come up, there’s this rush to get… let me challenge myself in some way. Not that How I Met Your Mother isn’t challenging–and I’m so lucky because other shows I feel would be slightly more monotonous, but I get to do amazing things on How I Met Your Mother that are fun and different–but I just wanted to play a different character, and so when this came around, I was like, ‘This is the best possible job that I could get.'”

“So it was just cool to run around and kind of shake off the sitcom and get really grounded into something. I really like the severity of Maria Hill, and I really liked the sort of officer approach to her character.”

Journalist: You have to play this authority figure to these four big name characters with the big name actors behind them…

Cobie Smulders: “I was terrified, I told you that.”

Journalist: Was there anyone you were really worried about trying to command that presence over…

Cobie Smulders: “Robert Downey, Jr. Yeah. And I had one line to him, and I was just like, ‘I don’t know how I’m going to say it, but I’m just going to try and move my mouth and breath out at the same time, and then hopefully form a sentence.'”

“First of all, he’s the nicest man, but I’ve watched him throughout his whole career and some of his films, even going back to the eighties–you know, Less Than Zero was one of my favorites–and also I feel like coming into this Avengers world, he’s not only Iron Man, and he was potentially one of the coolest ones, but he has done two Iron Man films, and I feel like he’s one of the main reasons that we’re doing this today. It was sort of like a godfather thing, and then it was also just that he’s extremely handsome, and then he’s also extremely intelligent, and highly charismatic, so it was a deadly combination. But I felt very intimidated around him, but there was nothing to be afraid of. Really, truly.”

“A lot of times we would get questions revolving around who is the biggest ego, and who freaked out on set the most, and I understand why those questions are asked, but truly everybody came together and really stepped up, and I feel, again going back to Joss Whedon, it’s because of Joss, because he wrote a script that was so good, that gave every one of these characters moments that they felt like their characters were served, and they were served as actors. So there was no, ‘Well, why did he get to do this,’ you know? Everyone had their scenes and were all happy with what they had to do, because I don’t know how he did it, but he did it.”

Journalist: It’s a really funny movie, but you play kind of the straight character. Was that something you pushed for, or was it written that way?

Cobie Smulders: “No, I actually did not want to have any zippy one liners or anything. I was very happy just giving out protocol and doing a shoulder roll and shooting people and chasing people, because, like I said, it was such a cool change for me. And I think that there were times where, Joss and I had this bit… there was actually a giant scene that was cut out of the movie where [it] began and ended with an interrogation of Maria Hill… she sort of book-ended it, but it was sort of emotional, so I couldn’t help but do these scenes with Joss, like, [crying] ‘Oh, God.’ Just doing the bit like, that’s how the movie’s going to start, ‘Oh, God, it was terrible! There were these guys, and they just kept coming, and there was nothing we could do about it.’ To start out this huge fucking movie like that just made me laugh.”

The Avengers opens in theatres tomorrow, May 4.