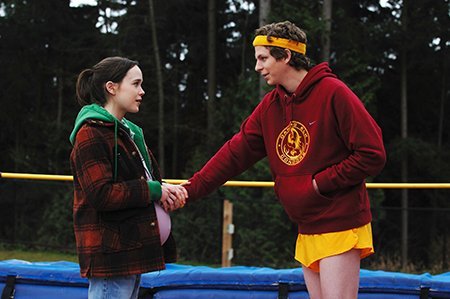 It seems only fitting that the same week Juno arrives on DVD, my other favorite film of 2007 would also arrive; the sadly overlooked gem Lars and the Real Girl. Both films feature some of the best comedic performances from the year, and both have more than their share of heart, worn proudly on their sleeves.

Those two funny, quirky gems are joined on store shelves by the failed sequel Aliens Vs. Predator: Requiem, Lord of the Rings wannabe In the Name of the King, and the well-liked thriller Before the Devil Knows You’re Dead.

Juno
Easily one of the best films of 2007, and a shoe-in for an honorary Oscar if you asked most people to vote on the awards, Juno is the feel-good movie that just doesn’t know where to quit. From the excellent casting of Ellen Page as the sharp-witted Juno, to the sweet and intelligent script by Diablo Cody, the film is a perfect storm of the best cinematic qualities that is given purpose and feeling by director Jason Reitman.

The film tells Juno’s witty story as she discovers that her best friend Paulie Bleeker (Michael Cera) got her pregnant when a night of boredom turned to a one-night love affair. Deciding that she can’t abort the baby, Juno discovers a sweet couple that are looking to adopt and agrees to give them the baby once she can “squeeze it on out.”

While the story deals with some tough subjects, there is a sense of wonder and innocence that permeates the story, and that is bought and sold by the performances, especially J.K. Simmons as Juno’s father, and Jason Bateman and Jennifer Garner as the hopeful couple.

This is a star-making role for Page, and it is a little hard to imagine anyone else in this role taking it to quite the same level. She has a way of turning simple lines into gold, and with Cody’s dialogue, Page shines all the brighter as a teenager trying to figure life out.

With the special two-disc DVD of the film, there are also a lot of great features once you’ve watched the movie. The best of the features is the commentary with Reitman and Cody who crack wise for the length of the film and offer some fantastic making-of details. Listening to them gives you a pretty good idea why the film turned out so well, and it’s one of the funniest commentary’s I’ve heard in a while. The DVD also comes with multiple deleted scenes, a gag reel, extended screen tests, a jam session video, and a series of making-of videos.

Kicking off right where the last film finished, AvP:R has a ship full of aliens and Predators crash-landing on Earth in a quiet, Colorado town. With all of the Predators killed off within seconds, the alien survivors get an early lead to breed and kill their way through the population as one, lone Predator comes to Earth on clean-up assignment.

The monsters tear their way through the town, killing off every character you can think of, and oozing their glowing green blood all over each other. As the dust settles, the body count climbs and the swarm of aliens keep popping up, you have to wonder why the Predators didn’t send a few more hunters. Or maybe the question is why the Predator came in the first place. But answers are not to be found in this simplistic hybrid, which feels like a very wasted opportunity for all involved, especially if you have ever enjoyed an Alien or Predator film before.

Where the first Aliens Vs. Predator film had great battles and impressive visuals, this film is like a wasteland of talent. It is dead-set on being a horror film, and settles into the small town setting, but never achieves the grit or surprises needed to pull off a real horror mood. And despite multiple attempts with the dialogue and loopy horror gags, AvP:R isn’t even a good B-movie.

The only big thing I can say about AvP:R is how well it mimics the genre, but that is hardly worth watching.

Other new arrivals this week include:

Lars and the Real Girl stars Ryan Gosling as a somewhat troubled man who falls in love with an anatomically correct, human-sized doll that he orders through the internet. While the premise sounds like a total joke, the film is sincere, funny, and sweet with memorable performances by Gosling and co-stars Paul Schneide, Kelli Garner and Emily Mortimer. Expect to be more than surprised by this fantastic film.

In the Name of the King: Dungeon Siege, stars a wild assortment of actors pretending they’re adventuring through Lord of the Rings, but the movie is directed by schlock filmmaker Uwe Boll. This, my friends, is the definition of a B-movie.

Before the Devil Knows You’re Dead is the story of two brothers who plan a perfect crime, which goes terribly wrong, and drags their family into the devastating mess.