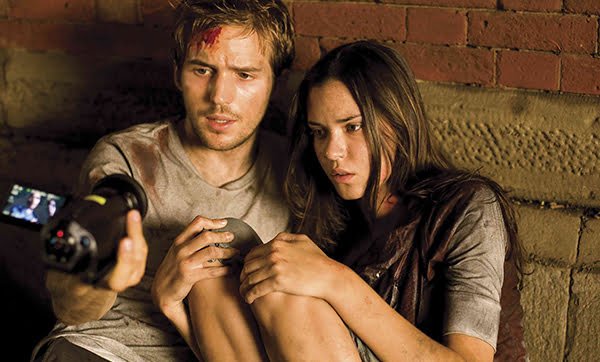 Reality and fiction have a twisted sort of relationship that is often hard to untangle, especially in any movie that attempts to say it is “based on a true story.” Arriving this week on DVD are three films aspiring to reality, in one form or another, but with varied results. New arrivals include the monster movie Cloverfield, the political drama Charlie Wilson’s War, and the sports tale, Resurrecting the Champ.

Cloverfield
One of the most anticipated films of the year was known for months simply by its release date, 1-18-08. The monster trailer, with its grainy images and confused scenes quickly became one of the hottest things on the web, and rumours swirled about what the film was actually about.

Lost producer J.J. Abrams managed to build a lot of buzz for Cloverfield, but the surprising thing is how much of that marketing connects to the film. While a lot of movies have campaigns that are meaningless, Cloverfield is ultimately exactly what you would expect from the trailers.

Set in Manhattan, and shot from the perspective of a single camcorder, the story follows Rob (Michael Stahl-David) and his group of friends on the night of a horrific event in the city. They escape into the streets, dodging flying debris, and discover the military has moved in and is trying to fight a giant creature that is destroying the city. The group could even escape, except that Rob gets an urgent call from Beth (Odette Yustman), the woman he not-so-secretly loves.

Channelling some serious real-life imagery with the destruction of the city, Cloverfield is a survival film set in a monster movie, with plenty of blood and guts thrown in almost zombie-style. It also shares a certain amount of its energy, and style, with that oh-so-classic of hand-held horror films, The Blair Witch Project.

As someone who appreciates filmmaking that is different and engaging, I loved Cloverfield. From the opening credits that declare the footage was found at the site “formerly known as Central Park”, to the ending, Cloverfield takes itself seriously enough to convince you the events are real for these people, and follows through to the end. That makes for a very enjoyable ride, with a unique perspective on an otherwise standard plot.

Charlie Wilson’s War
Charlie Wilson’s War is a great film with drama and laughs aplenty, but crazy as it may sound, I had the unmistakable feeling that I was actually watching a Star Wars movie that had been stripped of all the Jedis.

Set in the highly political 80s, and based on the real-life story of U.S. congressman/playboy Charlie Wilson, the film shows how one man, and a few of his high-profile acquaintances, helped bring down the Soviet Union’s forces in Afghanistan.

The film opens with our high-rolling congressman naked in a hot tub, with two strippers and a model. He notices a report on the television from Afghanistan, where the people of the country are trying to fight against Soviet invaders. When Charlie returns to his office, run by a number of comely women, he makes a small change to help the Afghanistan fighters buy better weapons.

That change snowballs into an integral campaign that would covertly fund Afghanistan and make it possible for the people there to fight back against America’s enemy, the Soviets. This unfolds only through the help of Joanne Herring (Julia Roberts), and CIA Agent Gust Avrakotos (Philip Seymour Hoffman), and some strategic cohersion, but it was a real-life event that changed history.

What is remarkable is how much of the story is actually based on fact. Penned by Aaron Sorkin, the man behind The West Wing and Sports Night, the film takes great strides to show just how wild Wilson was, but also, how effective he became. And as the real Charlie Wilson will tell you in the extras, he had no problems with the film showing some of his questionable behaviour.

The film is not very long, but because of all the political manoeuvring, it can get a little dull at moments. Hanks gives special energy to all of his scenes though, which seems to capture Charlie’s zeal. As always though, it’s hard to top Hoffman, who almost steals the film out from under Hanks and Roberts.

The extras a pretty skimpy, with only two to speak of, but they both give some interesting insight into the reality of Wilson’s activities and how the film captured his mischief and accomplishments.

Resurrecting the Champ stars Josh Hartnett as a young journalist who discovers that a homeless man living on the street (Samuel L. Jackson) is actually a former boxing champ. The two find equal comfort in one another, as they both face several personal challenges. The film mixes a true-life story with a fair bit of imagination, and the result is a film many critics have only praised because of Jackson’s performance. “Despite generating plenty of turmoil, Resurrecting the Champ fails to be compelling,” Mario Tarradell of the Dallas Morning News said in his review. “It does, however, succeed in being implausible.”

Television arriving this week includes the second season of the football drama Friday Night Lights, and season four of the classic comedy, Laverne and Shirley.