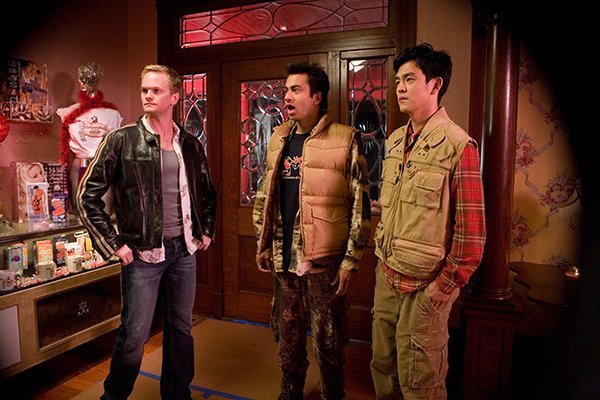 Harold & Kumar Escape from Guantanamo Bay
Given the fascination with stoner comedies and the lack of multicultural stars, I find it amazing that it took so long to make a Harold & Kumar sequel. While I’ll admit that the first film was low brow, and made for audiences who aren’t afraid of a little nudity, or lots of drug, I’m also of the mind that we don’t see enough great buddy films, and this fearsome duo are two of the most interesting characters to arrive on screens in ages.

In their second movie there is something new going on, and that’s a much more political, and satirical, viewpoint. The lowbrow humour is still there, as is the nudity, and Neil Patrick Harris parodying himself, but the film also has a few asides directed at American politics.

This time out, Harold (John Cho) and Kumar (Kal Penn) are on their way to Amsterdam, but one thing gets in the way. An incident on the plane has them sent off to the detention center at Guantanamo Bay after they’re accused of being terrorists. They manage to escape and have to find a way to prove they’re innocent.

That is all the film really needs to get going, and along the way they’ll party with more than a few weirdoes, including a strange one-eyed man, Neil Patrick, and yes, President Bush.

Reviews for the film are well above average for a film like this, which is a bit surprising considering it’s still essentially a film about farts and nudity, but it does make you wonder if standards have changed a little bit. Joe Leydon of Variety (!) called it “one of the ballsiest comedies to come out of Hollywood in a long time,” and Edward Douglas of ComingSoon.net said it was “easily the funniest movie since Superbad.”

Baby Mama
From some of the people responsible for Saturday Night Live comes a comedy about surrogate motherhood, and the challenges of two women finding common ground.

As with any film that involves SNL stars or talent of any kind, the problem is that the film just doesn’t look very funny, and the critics are agreeing on that point. “With virtually nothing in the way of visual or physical comedy,” Lou Lumenick of the New York Post said in his review, “there are more chuckles here than belly laughs, and most of them are delivered by the supporting cast.”

Tina Fey is surely one of the most talented stars to depart from SNL in some time, and her show 30 Rock is great, but she can surely do better than this.

Other new arrivals this week:

Deception stars Ewan McGregor, Hugh Jackman and Michelle Williams in a story about, well, lies and cover-ups. McGregor plays a boring man looking for a reason to live, and his new lawyer buddy (Jackman), introduces him to a dark world he never knew. As the title suggests though, not all is as it appears. Reviews for Deception suggest the film is not what it could have been, and Bill Goodykoontz of the Arizona Republic compares the film to the Oscars: “Both plod lamely at the beginning, milking inane dialogue, before trying to squeeze far too much into the last little bit.”

War, Inc. is a star-filled political satire set in the fictional country of Turaqistan where an American corporation has taken over and wants a high-profile minister murdered. John Cusack plays the assassin, fighting his own demons, who is sent in to do the job while trying to keep everyone happy. The film also stars Joan Cusack, Marisa Tomei, Hilary Duff, Ben Kingsley and Dan Aykroyd.

Ben X comes by way of Belgian director Nic Balthazar, and tells the troubled, often lonely story of an autistic boy named Ben dealing with school bullies and an overall unhappy life. Starring Greg Timmermans, the film incorporates live-action and gaming footage to tell its story docu-drama style as Ben comes out of his shell. The film has received good reviews, with Jim Slotek of Jam! Movies calling it, “a vivid little film about bullying and cyber-bullying.”

Lastly, Then She Found Me has Helen Hunt, who also directed the film, as a woman dealing with separation from her childish husband (Matthew Broderick), as she also attempts to connect with her birth mother after her adopted mother passes away. Life gets complicated though after she meets a new man, played by Colin Firth, and discovers that she’s pregnant. Early reviews of the film were quite good, with critics calling it a well-acted, touching tale.