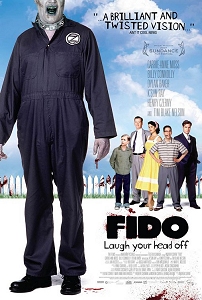 Everyone loves a good scare – that moment where the psycho killer leaps out at our hero, or when the zombie horde grabs hold of an unsuspecting victim and tears him apart. Once you’ve seen one horror movie though, except for a few great exceptions, they all tend to blend together.

And then along comes Fido, one of those exceptional exceptions that does more than throw around some blood and guts. Fido comes off like a dramedy about a boy who doesn’t seem to fit in, and then leaps into a series of social commentaries that tell as much about love as it does about fear.

Written by Robert Chomiak, Andrew Currie, and Dennis Heaton, and directed by Currie, Fido stars K’Sun Ray as young Timmy, a boy who spends a little too much time on his own in a 1950’s world where the dead have risen and been forced into a dull-witted servitude. It was all thanks to a company known as ZomCon who managed to create a collar that could control the living dead, but Timmy still doesn’t trust them, and neither does his father Bill, played by Dylan Baker.

That is, until Fido comes along – played by a dead-on Billy Connolly.

Things start to shift though when Timmy’s mother Helen, played by the brilliant Carrie-Anne Moss, buys a zombie to help her out around the house, and give the family some credibility around the neighbourhood. Timmy befriends the creature, who he names Fido, while his mother treats the zombie almost better than her husband. And at the same time Bill flat out refuses to accept Fido, overreacting every time the creature does something wrong.

In terms of visuals, the film is a marvel – popping off the screen in vibrant retro palette – recreating everything you might expect from a 50s-era film. But while Fido is great on so many levels, it’s really at its peak when the sub-text is most fluid, and the laughs are rolling along. Sure, blood splatters, people die, and the acting is modestly original – the real point is that this is a social comedy about how people treat each other, and get all too comfortable when they think they have something controlled.

Throw in all the camp value you can handle, and what you’ve got is a cross between Pleasantville and Shaun of the Dead, with a clever script about love, loss, and fear. It’s a lot to put together, but Currie and crew make it work on every level.

I really loved Fido, and I won’t deny that part of my adoration goes to the amazing style the film captures, but I also can’t say enough about the performances by Ray, Moss, Baker, and especially Connolly – who managed a fully-formed character without actually saying a single word. Actor Tim Blake Nelson, who plays the oddball neighbour Mr. Theopolis, also deserves loads of credit for his scene-stealing antics.

Now with any luck Fido will maul its way across the country and find the success it deserves among audiences.