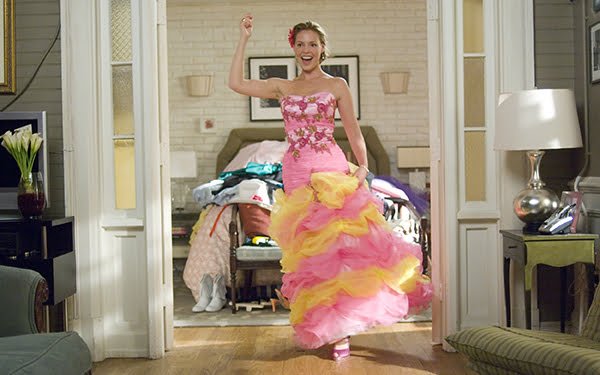 Dream the impossible dream, and settle in for one of the first great date movies in weeks, 27 Dresses. That is, as long as you’re not worried about your loved one getting ideas about marriage. If you’re looking for more serious fare this week, the best bet on DVD is the Oscar-nominated French film, Diving Bell and the Butterfly. Other new arrivals include the Golden Compass, How She Move, and a smattering of classic and trashy TV shows.

27 Dresses
Ask most girls what she dreams of in her future and chances are she’s thinking about her wedding day. While I may not be sure this is absolutely true, that is at least the type of world that 27 Dresses exists within. Fact is though, in a date film, there’s really no reason to argue.

With a script that wanders the familiar roads of every other marriage fantasy/comedy ever made, 27 Dresses is saved by casting, and casting alone. Starring Katherine Heigl as perennial bride’s maid Jane Nichols, we find out just how much Jane loves being the go-to girl at weddings as she runs between two on the same night.

Heigl, who is a fantastic lead in the film, can’t hold the entire film flimsy script though, so it’s lucky for us that she’s joined by the incredibly funny Judy Greer as the not-enough-guys-to-go-around Casey. Also providing a fairly decent turn as the cute, but hard-edged lead guy is James Marsden as wedding columnist Kevin Doyle.

While 27 Dresses follows the romantic comedy formula with glee, it’s still a funny movie, with Heigl delivering scene after scene of laughs and embarrassing moments. As a date movie, there can be no denying that a lot of women will identify with her character, while a lot of guys will probably like the film because she is funny and beautiful.

Outside of those few, interesting stars, the film does have a problem with boring actors. Among the disappointments were dull appearances by Edward Burns as the love interest, George, and Malin Akerman as Jane’s sister, Tess. Those are key roles, which seriously undermine the film’s energy, but it is worth a watch, especially if you like sweet, funny comedies. Just watch out for the cheesey ending.

This remarkable, cinematically challenging film tells the real life story of Jean-Dominique Bauby, the once-famed editor of French Elle Magazine who become completely paralyzed after a stroke at the age of 43. The only part of his body that he could still move was his eye, which he eventually learned to blink in sequence to spell out words. He would in-fact write his memoir this way, but the miraculous way director Julian Schnabel brings Bauby’s consciousness to film is astounding. It is almost impossible to watch even a few snippets of film without feeling like your immersed in this man’s head.

While Diving Bell and the Butterfly is sub-titled from its original French, the visuals are more than enough to keep the film engaging and immediate. Actor Mathieu Amalric takes a role that is difficult to relate, and brings this person’s life to a very personal level.

The artful experience of the film, and the way it seems to put you inside Bauby’s head, is a great achievement, and this is one of the rare films that will indelibly leave its mark on you.

Golden Compass
Dakota Blue Richards stars in this other-worldly fantasy about an orphan who finds herself in an alternate version of earth where people’s souls take the form of animals. The film features an all-star cast and voice work by stars Nicole Kidman, Daniel Craig, Freddie Highmore, Ian McKellen, and Christopher Lee, to name a few, but didn’t exactly wow audiences or critics when it came to theatres. On DVD, the Golden Compass has received an equally chilly reception with complaints about the film’s joyless, unimaginative approach. Criticism about the film’s dank view of religion hasn’t helped the films chances much either.

How She Move
The popularity of this film, especially among critics, is surprising but likely very welcome news for the Canadian filmmakers behind the project. It’s essentially another youth culture dance movie, but with a remarkably real-world approach, and better acting. Debut actress Rutina Wesley is Raya, a student who wants to escape the projects where she lives, whether it be through her smarts or her dance moves.

Television on DVD
Classic and forgettable television arrive in spades this week, topped by classics like Cheers, season nine and the seventh season of The Waltons.

On the trashy side of things, the second season of Friends offshoot Joey arrives, along with re-issues of seasons one through three for the aliens in high school series, Roswell.

Falling somewhere in the middle of the two categories is essentially the top of the heap for 90s television: season four of Beverly Hills, 90210.