DVD Tuesday: ‘Shake Hands With the Devil’, ‘P.S. I Love You’ 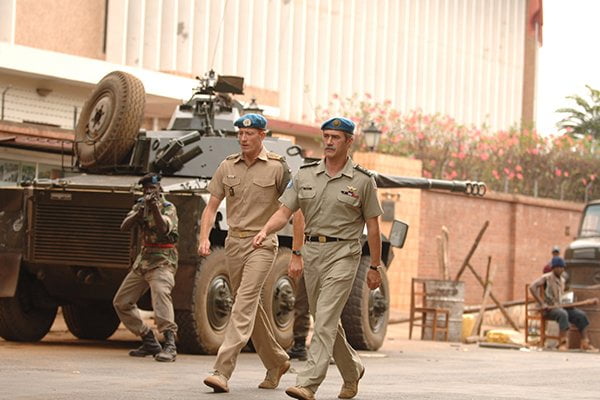 Roy Dupuis in Shake Hands with the Devil

War and death are, perhaps, two of the greatest subjects in filmmaking, covered in many different ways since film was first created. This week on DVD, war takes centre stage in Shake Hands With the Devil, the real-life account of a Canadian solider charged with protecting peace in Rwanda, who is refused the power to make a difference. While death gets the funny treatment in P.S. I Love You, as a young woman tries to deal with the loss of her husband.

Shake Hands With the Devil
The story of Canadian soldier Lt. Gen. Roméo Dallaire‘s United Nations peace mission to Rwanda in 1994 has received a lot of attention over the years, and rightly so. Dallaire’s story is a horrific one, about a country in turmoil, and the man who tried to prevent the slaughtering of a minority population, but wasn’t given the power to stop it.

Based on Dallaire’s autobiography of the same name, Shake Hands with the Devil is the second film based on the soldier’s story, following a 2004 documentary with a very similar title.

In this adaptation, set amid the days when the soldier was trying to convince the U.N. about the issues in the troubled country, Dallaire is played by Roy Dupuis. As many will already know, however, Dallaire was unable to get the U.N.’s support, which is the primary focus of the film.

Toronto Star critic Peter Howell compared the drama to the previous documentary, but noted “this new movie… gets much closer to the heart of the matter.” He also said that there was a chance to find “insights and nuances” in this film because it is a drama, rather than a documentary. “Much credit for this goes to the resourceful Dupuis, who is making a career out of playing Canadian icons.”

P.S. I Love You
Poignant, powerful filmmakers may be the reason that I watch movies in the first place, but I have to admit I’m still a sucker for Hollywood’s lighter fare.

For the latest in breezy movie meals, look no further than P.S. I Love You, a dramedy that handles questions of love and loss, with a shaker full of salt and plenty of quips.

When Holly, played by Hilary Swank, looses her husband to a brain tumor, she barely knows what to do with herself and locks herself away from the world. On her birthday, however, she is surprised with a cake from her dead husband, which comes with by a tape recorded message from beyond the grave. Gerry, played by Gerard Butler, was not the sort of guy to plan ahead, but he has left Holly a series of letters and surprises to get her through his death.

Swank is joined in this funny, odd little comedy by Kathy Bates as Holly’s mother, Lisa Kudrow and Gina Gershon as her best friends, and Harry Connick Jr. as her new bartender/friend, Daniel.

All told, the story is devised to pull at every heart-string, and doesn’t exactly tread new ground. The second half of the film also feels like its missing some vital energy, and a certain amount of wit for this otherwise grim tale. All of that said though, and P.S. I Love You is actually a sweet tale that attempts to tell something a bit different.

Swank and her co-stars are also well-cast, with Kudrow providing ample funny-time against Swank’s teary performance. Perhaps the only other thing missing is a deeper connection early on with the soon-to-be-dead hubby.

2 Days in Paris
Julie Deply and Adam Goldberg star in this odd, but funny story of a couple dealing with their relationship while in the city of light, amid parents, old boyfriends, and the inherent paranoia of not being able to speak the language. The film was written and directed by Delpy, who Roger Ebert of the Chicago Sun-Times said, “created two original, quirky characters so obsessed with their differences [to the point] that Paris is almost a distraction. I don’t think I heard a single accordion in the whole film.”

2001: A Space Odyssey
A re-issue of the 1968 classic by Stanley Kubrick and Arthur C. Clarke which looks at mankind’s evolution, at least partially through the eye of the HAL 9000 computer. One of the greatest films ever created, 2001: A Space Odyssey is perhaps strongest for its stunning visuals, and thoughtful approach to history and the future.

Mystery Science Theater 3000: The Movie
And for something completely different, the Mystery Science Theater crew tackles a feature-length film, the 1955 cheesy-classic, This Island Earth. Launched originally on TV, the series is a silly and hilarious show about a guy and his two robot co-workers who are forced to watch horrible old sci-fi films, so they mock them from beginning to end.

Everything’s Gone Green
And lastly, Douglas Coupland‘s first film, which he wrote the screenplay for, arrives on DVD with Paulo Costanzo starring as the “twentysomething uberslacker” Ryan as a guy trying to win a girl from his complete opposite.

Television on DVD
Go back to those epic days of yore in Rome, seasons one and two, or check out the epic days of trashiness in the Trailer Park Boys, season seven. Also arriving is one of HBO’s last critically acclaimed TV shows, the shortlived Deadwood, which debuts the final seasons two and three on DVD this week.