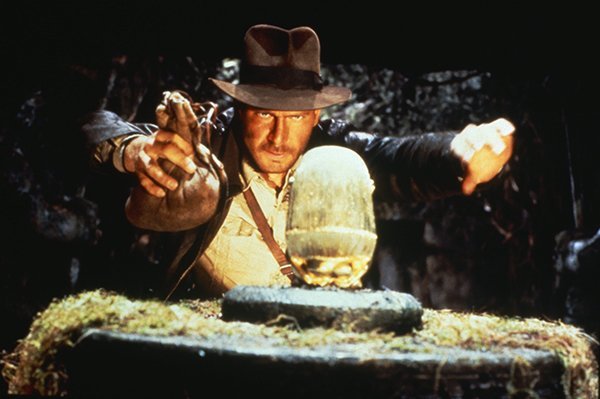 “Snakes. Why’d it have to be snakes?” Those classic lines still make me smile, and since Indiana Jones and the Kingdom of the Crystal Skull lands in theatres later this month, what better time for Paramount to re-release all three of Indy’s adventures? Also arriving this week is the grim thriller Untraceable, classic movies from Warner and Fox, and the girly comedy, Mad Money.

Indiana Jones (Special Collector’s Edition)
Raiders of the Lost Ark, Temple of Doom, and Last Crusade
Harrison Ford makes for an iconic figure in that distinctive hat and leather jacket, and since he first appeared as Indy, the character has become a world-famous cultural icon who commands one serious franchise.

Raiders of the Lost Ark started everything off with a bang back in 1981. With co-stars John Rhys-Davies, and Karen Allen, the film introduces us to our hero as he fights to keep the Nazis away from the Ark of the Covenant. The film barrels through the storyline with barely a breath to spare, ending in one of the most visually engaging scenes put to film – the opening of the Ark. By today’s standards the film is perhaps a little out of date, but the production qualities still carry a lot of weight, and the film feels utterly authentic.

Next, there was my least favorite of the three films, the Temple of Doom. Based on a story that director Steven Spielberg and writer George Lucas admit is utterly dark, the film is not quite the adventure most fans would have expected after Raiders. Between the creepy-crawlies, sacrifices, monkey brains, and children being held captive, it’s hard not to feel a bit bogged down. It is all epic stuff, but on a scale we didn’t quite see in the first film. Temple of Doom is still a great adventure that represents the franchise quite well, but it doesn’t seem exactly cut from the same cloth as many fans expected.

Finally, and easily my favorite, there’s the Last Crusade with Sean Connery as Indy’s father. The Nazi are back, hot on the trail of our Joneses as the two hunt for the Holy Grail. The dynamic between Connery and Ford is half of what makes the film work, but the twists and turns, constant jokes, special effects, and of course, the locations and sets are on a scale most films have never matched. They are of course also exactly what we have come to expect from the series, and from Spielberg and Lucas.

None of the DVDs are exactly popping with extra features, but if you really want a special edition of the series go pick up the boxed set released a couple of years ago. For newcomers to the franchise, or anyone who just wants to pick up their one favorite Indy film, these special editions are well worth a look and the features will have you all set for Ford’s return to the epic role.

Untraceable
Normally I would go out of my way to see any movie that features Diane Lane, but Untraceable was never a film I would have rushed to see, even when the DVD landed in my mailbox. Director Gregory Hoblit seems to have jumped onto a sinking ship with his choice to direct this concept-driven tale about an FBI agent, played by Lane, who is trying to hunt down a serial killer who uses Internet viewers to commit his crimes.

Although it borrows heavily from bloodier films like Saw or Hostel, Untraceable is primarily a thriller that has been dropped into a quasi-horror movie. At the same time the film seems to suggest society is sick for hunting down gory imagery, but as Michael Phillips of the Chicago Tribune commented in his review, “In addition to being dull, Untraceable is a monster hypocrite, wagging its finger at the mass audience’s appetite for strictly regimented, ‘creative’ torture scenarios,” adding, “this film is not really in a position to point a finger.”

Classics DVDs…
There are a lot of classics being re-released this week, topped by Warner’s intriguing box set, Frank Sinatra: The Golden Years. Some of Ol’ Blue Eyes’ best films are in this package, including The Man with the Golden Arm, Marriage on the Rocks, None But The Brave, Some Came Running, and The Tender Trap.

Not to be outdone, Fox has delivered some exceptional westerns, with John Wayne: The Fox Westerns and Fox Western Classics. The John Wayne collection is split, with three of his later movies from the 1960s included beside the 1930s film The Big Trail. Only The Big Trail includes much in the form of extras, but they are impressive. The film comes in two aspect ratios, has a commentary by Richard Schickel, plus four interesting featurettes.

Western Classics includes three exceptional films: Rawhide, The Gunfighter, and Garden of Evil. None of the films have been exactly easy to find in recent years, so it’s welcome to see them finally on store shelves. The package doesn’t feature much in the way of features, but the films look and sound great.

Mad Money
Arriving mere weeks after its theatrical release, Mad Money features a brilliant cast slumming it in a weak example of a heist comedy. Diane Keaton, Katie Holmes, and the sometimes talented Queen Latifah are three women looking for their pot of gold at the end of the rainbow. They devise a scheme to walk away with soon to be destroyed cash from the bank they work at, but their perfect plan gets a snag and the three are left trying to find a way to stay out of jail and keep their loot.

Most critics called the film a lacklustre comedy, and the reviews were definitely on the negative side of things. Roger Ebert of the Chicago Sun-Times explains at least one of the problems with the film: it lacked motivation. “There is little suspense, no true danger; their plan is simple, the complications are few, and they don’t get excited much beyond some high-fives and hugs and giggles.”

Plus, new television arriving on DVD this week includes the third season of Two and a Half Men, and Tin Man, the sci-fi reimagining of The Wizard of Oz.