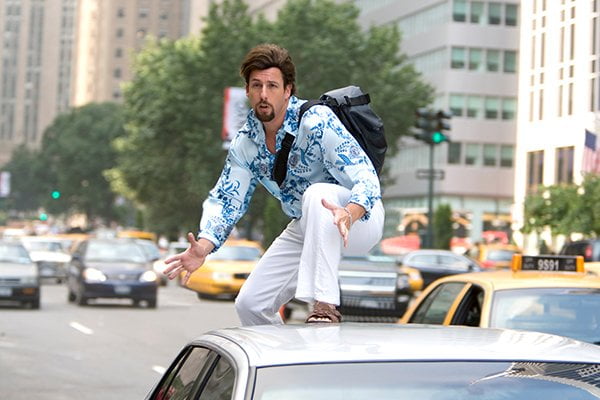 Adam Sandler in ‘You Don’t Mess With The Zohan’

Take a walk abroad this week, with three films that roam around the world. In You Don’t Mess With The Zohan, an Israeli agent wants to stop all the fighting and escape to become a hairdresser. The animated Kung Fu Panda features Jack Black as a giant panda who has been chosen to become a kung fu master. And the foreign film Mongol gives a glimpse back to the epic rise of Mongolia’s legendary leader, Genghis Khan.

What makes Zohan so funny is the constant slapstick comedy, and hyper-stylized, cartoonish action. Zohan can do push-ups without using his hands, he can catch bullets with his mouth, and he has a perverse sexual desire for women of the elderly variety. It’s one of the silliest films I’ve seen in ages.

That tone can get a little tiring by the second half, and Zohan is a little too random at times, but it is really, really funny. There is also something charming about a movie that takes on a serious issue like this, and can tone it down for audiences. Many people will still be insulted I’m sure, especially by co-starring appearances by a few of Sandler’s favorite comedic actors, but Zohan is clever, and Sandler will no doubt return to this role for a sequel, unless I’m vastly mistaken.

Mongol
Russian filmmaker Sergei Bodrov brings one of the greatest figures of history to life in Mongol, the epic story based on the life of Genghis Khan.

Based on historical and scholarly research on the actual life of the conqueror, Mongol was shot on-location, and tells a resonating story that delves deeper than just the battles. The film starts in the leader’s youth, when he was known as Temudgin, and follows his rise to strength, and the eventual battle that would change his life. In addition, the film is a love story, about the woman that would ultimately also shape Temudgin’s destiny.

For anyone familiar with Hollywood’s version of this type of epic story, Mongol is a dramatically different type of film, with a lot to say, no doubt about it. It is also incredibly poignant, and has been very well received since it first screened at the 2007 Toronto Film Festival.

The GATE’s own Christopher Heard reviewed the film, noting one of the strongest aspects in the movie.

“Bodrov has painted a rich and resonating picture of a man who was fearless and ambitious but who also truly believed that it was the love of his wife that made everything possible for him,” Heard said in his review. “So while this film is a historical, true-life epic, it also, amazingly, functions as a love story as well.”